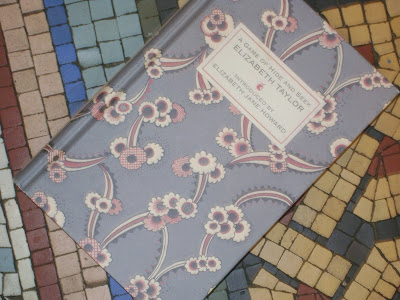 "Just a little below the Catholic Church," said Aunt Alberta.

At that point Valancy laughed. Nobody else laughed. What was there to laugh at?

"Is that a vital part?" asked Valancy?

The Blue Castle is funny, irreverent, romantic and more than a little far-fetched. I loved it. It's difficult to review without spoilers, so no peeking if you're planning to read it!

Valancy is 29, unmarried, and treated as a joke and a failure by her extended family. After suffering pain in her chest she visits her doctor who tells her she has one year to live. She decides to make the most of her final year and rejects her family, leaves home to nurse a sick school-friend and proposes to the local bad boy, Barney Snaith. Marriage to Barney brings her happiness - her own 'blue castle' - until she starts to wonder about the diagnosis from her doctor ...

Lucy Maud Montgomery did not set The Blue Castle on Prince Edward Island. It is set in Muskoka in Ontario, Canada, where Montgomery spent a holiday which inspired the novel.

I also read Elizabeth Taylor's A Game of Hide and Seek in Brighton last week. It is a beautifully written novel and I couldn't put it down, but I think Blaming is still my favourite. This Virago Modern Classics edition has an introduction by the novelist, Elizabeth Jane Howard. Anybody read her?

Posted by Vintage Reading at 15:15

What a gorgeous quote. I must read The Blue Castle now!

What a gorgeous funny quote. I must read The Blue Castle now.

I have read some EJH and I enjoyed most the four books in the Cazalet series, see here. Lovely long family saga, partly autobiographical.

Your Elizabeth Taylor book looks almost like a Persephone! I haven't read her. In fact, have only heard of her recently, and I'm curious.

The Blue Castle sounds lovely. It's a shame it's so hard to get hold of! I shall look out for a copy but in the meantime I've found an online version so shall read that on your recommendation.

I have A Game of Hide and Seek waiting to be read on my tbr pile...I look forward to exploring some more Elizabeth Taylor as I've only read Angel and some short stories so far.

Ah! Your snippet from The Blue Castle alone makes me want to read it! I didn't read the spoilered part because I definitely intend to find a copy of this one and give it a read. I re-read Anne of Green Gables a few years ago and fell in love with it all over again!

I've never heard of the author Elizabeth Taylor, but the book you have is so beautiful! I'd love to hear more about her, because now my interest is definitely piqued? Can you compare her to any other authors?

I have a copy of The Blue Castle and will try to read it soon. I'm all for holiday reading!

I inherited most of the L M Montgomery books from my mother - so last night, after reading your post, I pulled out The Blue Castle and started reading. It's an absolute joy, and I don't want it to end.

I've been wanting to read The Blue Castle for ages, it's such a shame it's out of print here. The 'Emily' trilogy is my favourite of LMM's work, but I love just about everything I've read by her.

I keep seeing that Elizabeth Taylor book in Waterstones and couldn't decide whether to buy it or not. It's good?

I've read one short story by Elizabeth Jane Howard. It was from The Penguin Book of Modern Women's short stories and called Summer Picnic. I thought it was utterly delightful and beautifully written.

I recently read In a Summer Season:

I'm interested in those tiles under the book - is that a kitchen shelf?? Just beautiful!

Merenia, let me know what you think of it.

Claire, yes, it seems Persphone don't have a monopoly on that pale grey! ET's a very good writer but there is a certain coldness to her prose which means she will never be one of my favourites.

Rachel, I've always thought Persephone should re-issue The Blue Castle. I've not read any of Taylor's short stories, but I think I've read all the novels, now. Blaming is by far my favourite.

Steph, I hope you can get a copy of The Blue Castle. Elizabeth Taylor has been compared to Jane Austen although I wouldn't go that far! She is deservedly getting some attention now though.

Mad Housewife, I will look out for your review of TBC. You're on my sidebar so I won't miss it!

Anonymous, I'm so glad you love the book, too, and how wonderful to have your mother's copy.

Julie, I've not read the Emily books but I know they are a huge favourite on the chicklit forums. I'll put them on my tbr list.

Cath, I admire ET but I don't love her like I do, say, Jane Austen or Willa Cather. You have made me want to read EJH now.

Nan, I'm checking out your ET review. Sadly the tiles are not mine. They are on the floor of the Brighton Museum. I did have a much nicer picture but my daughter accidentally deleted it!

Oh I love the sound of The Blue Castle - that will go down on my vast list of tbr's.
EJH is a brilliant writer - the Cazalet Chronicles (first one is The Light Years I think) are probably the best known but I have a whole shelf of her earlier stuff that I read back in the Seventies.
Very glad to see that Elizabeth Taylor is back in print again - I read a lot of her as well around the same time as I really loved all the sort of female writers that Virago published in those gorgeous dark green covers.

I stumbled across a copy of The Blue Castle in a remaindered book shop some 25 years ago now. Did not even know it existed. There were three other titles on the same shelf as well and I fell upon them with cries of delight. Apart from the Anne books, The Blue Castle is my favourite LMM. I am so glad you loved it too.