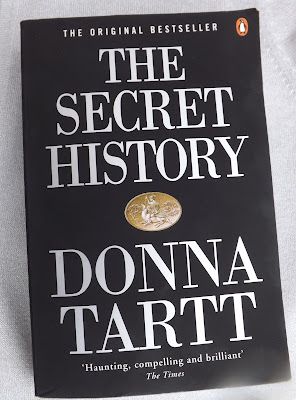 "I hope we're all ready to leave the phenomenal world, and enter into the sublime?" The Secret History

I've spent this rainy Easter weekend re-reading The Secret History, Donna Tartt's wonderful dark story of the undergraduates who take their studies in Ancient Greek a little too far when they re-enact the bacchanal.  The narrator is Richard Papen, an outsider at an elite liberal arts college in Vermont who falls in love with the wintery landscape and becomes enthralled by a group of five  students; Bunny, Henry, Francis, and twins Charles and Camilla who study Ancient Greek with charming Classics professor Julian Morrow.  The classes are only open to students personally selected by Julian who doesn't take a salary and teaches in a classroom full of flowers.  They dress in a classic English style in quality fabrics, write with old-fashioned pens and exude a cerebral dark glamour.

The novel is relayed retrospectively by Richard in the manner of the unnamed narrator in Daphne Du Maurier's Rebecca and this works to great effect.  Like Rebecca, too, nobody is particularly likeable or trustworthy in The Secret History.  Richard  believes he is accepted into the group and begins to study with them and spend weekends at an isolated country house belonging to Francis, but he is unaware of their occasional nightly intoxicated rampages across the countryside based on the ecstatic elements of Greek Dionysia.

The Secret History unfolds into a page-turning whydunnit with dark consequences but it is also an entertaining campus novel and so beautifully written that - along, with Richard Papen - you can almost see the 'Commons clock tower, ivied brick, white spire' of Hampden College and the Vermont nights 'disordered and wild with stars.'
Posted by Vintage Reading at 13:07 5 comments: