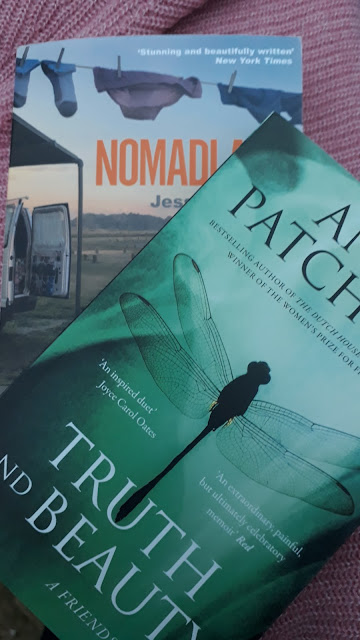 Being human means yearning for more than subsistence. As much as food or shelter we require hope.  And there is hope on the road. It is a by-product of forward momentum. A sense of opportunity as wide as the country itself. A bone-deep conviction that something better will come.

Something about Jessica Bruder's Nomadland really captured my imagination.  I'm interested in the lives of drifters, hobos, transients and migrant workers - from the pioneers in Laura Ingalls Wilder's Little House on the Prairie to novels by Miriam Toews, Louise Erdrich and of course, John Steinbeck.

I haven't yet seen the film so all my perceptions are based on the book in which journalist Jessica Bruder spends a considerable amount of time travelling with nomads, absorbing their philosophy and attending their meetups including the famous Quartzsite in Arizona.  Some are forced onto the road for personal or economic reasons while others just prefer living off-grid.

The focus is on Linda May who became homeless in her 60's, lived for a while on her daughter's couch in an already overcrowded apartment before taking to the road with the reasoning. 'I'd rather be queen of my own house than live under the queen of someone else's house.'  On the road she finds many other nomads in their 50's, 60's even 70's.  Many survive on social security taking back-breaking seasonal work as camp hosts at forestry centres, Amazon warehouses or in sugar beet processing plants.

Bruder encounters camaraderie and cheerfulness but experiences how tough life is with RV breakdowns, freezing temperatures and work-related injuries a recurring problem. Many get through their Amazon Camperforce shifts on paracetamol and ibuprofen, walking for miles in the warehouses and getting repetitive strain injuries from the hand held scanners.

Bruder's time spent with nomads extends to working the same jobs.  In one episode both amusing and slightly chilling she works at an Amazon fulfilment centre where she is pursued by a robot loaded with patchouli oil and reeking of it.

As well as the warmth of characters such as Linda May, Ghostdancer, and Swankie Wheels it is the quality of writing that makes this book so good.

See you down the road!