A Life of My Own 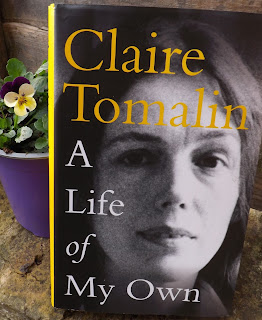 Claire Tomalin's 1997 biography of Jane Austen is generally thought to be one of the best - extensively researched, clear-sighted and affectionate.  I particularly liked her thoughts on Persuasion:


The warmth and softness of the book is all Anne Elliott's in her responses to people, landscape and season, she and Marianne alone among Austen heroines cherish the beauty and sadness of autumn.

I'd not made a connection between Anne Elliott and Marianne Dashwood from Sense and Sensibility before.  That's the thing with Austen, the more you read, the more you see.

Claire Tomalin has just published a biography of her own life which makes for fascinating reading.  There are chapters devoted to her early life with a French father and musical mother, her undergraduate days at Newnham, Cambridge, her marriage to the journalist Nick Tomalin who was later killed on assignment in Israel leaving her to raise three daughters and a young son with disabilities.  There is also a very moving chapter on the loss of one of her daughters who was a student at Oxford.

Despite personal tragedy Tomalin continued to work as a book reviewer and editor with a strong belief in the importance of critical discourse and the power of good writing.  At the age of 53 she left the Sunday Times where she was literary editor and began to write widely acclaimed literary biographies and finds personal happiness when she marries again.

I always like to re-read Persuasion in the autumn, what are your seasonal reading plans?
Posted by Vintage Reading at 15:48 14 comments: