The Provincial Lady in Wartime 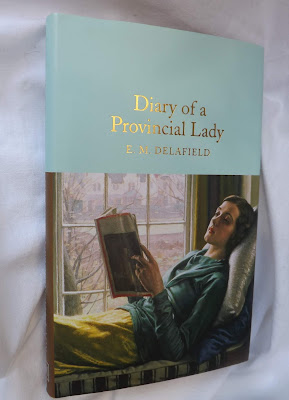 For those of us who feel it is necessary to have The Provincial Lady with us At All Times  the Macmillan Collector's Library edition is small enough to fit into a handbag or pocket and also has the wonderful Arthur Watts illustrations.

The Provincial Lady in Wartime (not in this edition) is one of the most vivid and humorous accounts of life in England during the beautiful September of 1939 - the time of the Phoney War. A huge wave of patriotism sweeps the country and everyone agrees that ‘we’ve got to show 'Itler he can’t go on like that, haven’t we?’ In her Devon home, the garden is full of Michaelmas daisies, dahlias and nasturtiums and the weather is lovely. It is difficult to believe that war has been delclared. The Prov Lady receives two little evacuees Margery and Marigold. Husband Robert is an ARP Officer and takes his duties extremely seriously, and daughter Vicky and son Robin are still at boarding school.


Determined to help the war effort the Prov Lady takes a flat in Buckingham Street in London hoping to find work using her literary skills. This proves impossible as there are many more volunteers than available work and she finds a job taking shifts in the all-night canteen operating in the ARP station under the Adelphi hotel. Here she meets some wonderful characters including lovely friend Serena, awful Mrs Pussy Winter-Gammon, a Society Deb whose mother eventually takes away and the female Commandant who dashes around raging that she is the only one who realises that England is at War to which everyone replies It Hasn’t Started Yet.
Never impervious to clothes, the Prov Lady buys herself a navy siren suit and throws a sherry party at which everybody discusses the war and friend Rose declares it will be Over by February.
The Provincial Lady in Wartime is the last of four volumes.  Tragic events in E M Delafield's own life meant that she could no longer continue to write in the same humorous and semi-autobiographical style and there is a tinge of sadness to this final volume.
Posted by Vintage Reading at 16:31 10 comments: