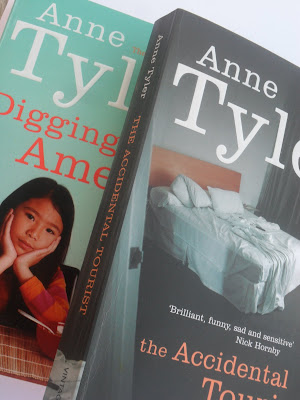 'Macon sat next to her with a magazine he'd found rolled up in one of her pockets. He saw that The Police were experiencing personality conflicts. That David Bowie worried about mental illness, that Billy Idol's black shirt appeared to have been ripped halfway off his body. Evidently these people led very difficult lives. He had no idea who they were.' The Accidental Tourist,
Anne Tyler

Some regard Dinner at the Homesick Restaurant as Anne Tyler's greatest novel. It's a little sombre for me. The Accidental Tourist is my favourite of the eight or nine Tyler novels I've read. It's the story of a blossoming love affair between middle-class pedant Macon and streetwise, extrovert Muriel. Macon writes tourist guides for people who don't like to travel and Muriel has half a dozen low paid jobs. They meet when she trains his psychotic (but lovable) dog, Edward.

Edward has a nasty habit of lunging at people on bikes, cornering family members in the laundry room and 'treeing' people ie chasing them up trees. Although the novel has tragic elements - Macon is grieving the loss of his son and the subsequent break-up of his marriage and Muriel is a single mother who has had to fight for everything - it is a wonderfully comic novel.

Geena Davis played Muriel in the 1988 film. I've never seen the film but I suspect Geena Davis is rather too pretty for Muriel as described in the book. She is a wonderful creation, over-dressed, too much make-up and hair, smart, tough and transparent.

Virginia Woolf said of Jane Austen that she is a writer of whom 'it is hardest to catch in the act of greatness.' This could also apply to Anne Tyler. A great writer but you just can't see how she does it.
Posted by Vintage Reading at 12:02 14 comments: 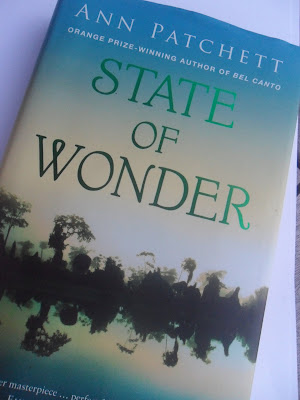 My autumnal American reading plan is going pretty well except that I sat up waaaaaay too late last Sunday to finish State of Wonder and then felt a bit of a wreck at work the next day. If I told you that the plot revolves around a woman who sails along the Rio Negro to seek closure for the death of her colleague and also to track down a formidable female scientist who is investigating pregnancy in indigenous tribeswomen who remain fertile until their seventies by eating the bark of a tree, you may think it is a little far-fetched!

Dr Marina Singh also loses her luggage, performs a c-section without anaesthetic or instruments, wrestles with an anaconda, has nightmares from the Larium she is taking to prevent malaria and dodges poison arrows. I loved every minute of this novel and it reminded me a little of another favourite, The Poisonwood Bible by Barbara Kingsolver.
By contrast, Anne Tyler is a writer whose novels remain firmly rooted in Baltimore. Eudora Welty admired her work and Nick Hornby has called her 'the greatest novelist writing in English.' I'm enjoying Noah's Compass right now and I'm planning to re-read The Accidental Tourist next. I do like the way Tyler uses the vernacular to create an authentic American voice.
By the way Mrs Miniver's Daughter and Seagreen Reader and Lilac in May I'd love to comment on your blogs but your comments filter does not like me!
Posted by Vintage Reading at 11:39 19 comments: 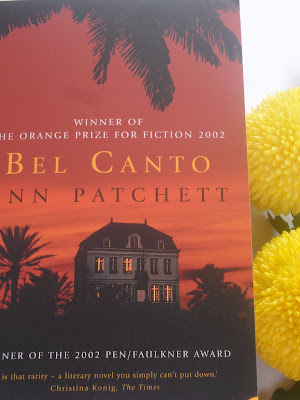 Autumn seems to be whizzing by but I've taken the time to enjoy my yellow pom-pom chrysanthemums and Ann Patchett's highly original novel Bel Canto. (Thanks for the recommendation Becca!)

Mr Hosokawa is a prominent Japanese businessman. Although work takes up most of his life he has had a passion for opera since his father took him to see Verdi's Rigoletto as a child. A birthday party is held in his honour at the home of the vice-president and the opera singer Roxanne Coss has been engaged to sing for the guests.
While the guests are enthralled by the soprano's beautiful voice the house is captured by armed freedom fighters and the guests are held hostage. Eventually the women are released - with the exception of Roxanne Cross - and all of the men, who include prominent diplomats and politicians, are held. A stand-off develops with the police circling the house with loudspeakers and the gunmen refusing to negotiate until their demands are met.
During the siege, relationships between the hostages and terrorists develop and change. Men whose lives normally revolve around work and terrorists devoted to their cause begin to develop their passions for music and chess and there is even a 'hostages v terrorists' football match!
I've just given the briefest outline of the plot because I don't want to introduce spoilers but what I love about this novel is the way Ann Patchett writes about opera. It reminded me a little of Willa Cather's writing about a perfomance of Casta Diva in My Mortal Enemy. I've already started Ann Patchett's latest novel State of Wonder and I can't put it down.
Posted by Vintage Reading at 13:15 16 comments: