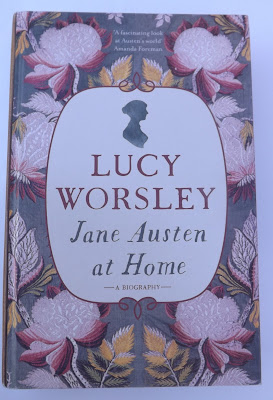 Another day, another book about Jane Austen!  This one is particularly enjoyable.  Lucy Worsley is a charismatic historian and television presenter and brings her signature style to Jane Austen at Home.

I've read quite a few Austen biographies but there were lots of intriguing little details in this one that were new to me.  For example, Worsley ponders whether the new and fashionable paint colour 'patent yellow' or 'Indian yellow' which was all the rage in Bath at the time Jane, Cassandra and her mother were living there was used to paint the walls in the apartment they lived in.  She comes to the conclusion that as they had to move to increasingly reduced circumstances in Bath they wouldn't have had their rooms painted.

It is known that Austen wasn't keen on the 'white glare' of Bath and relieved to leave it, but of course it gave her the creative inspiration for two of her finest novels Northanger Abbey and the wonderful Persuasion.  Worsley is good at identifying possible building and characters that Austen utilised in her novels and it would never have occurred to me that one of her own brothers may have been the model for the awful Mr Dashwood in Sense and Sensibility!

I cannot agree with Worsley that Sense and Sensibility is the least favourite Austen novel with modern readers or that Elinor Dashwood 'is a bit dull'   In fact, she possesses a rather dry humour of her own particularly when she teases the romantic Marianne for her passion for dead leaves. That said, Worsley is clearly a fan and her passion for Austen comes through in this book.  I'm so glad she takes Charlotte Bronte to task for her famous critical comments about Pride and Prejudice.  Worsley rightly points out that Austen paved the way for subsequent women novelists.

Highly recommended if you like Jane Austen or if you are interested in the Georgians.  The cover has a simply beautiful eighteenth century textile design and a yellow spine.  They should do more books with yellow spines.
Posted by Vintage Reading at 03:12 10 comments: