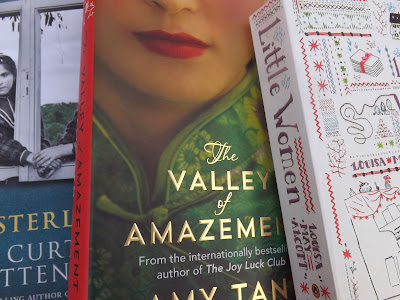 "Christmas won't be Christmas without any presents," grumbled Jo, lying on the rug.
"It's so dreadful to be poor!" sighed Meg looking down at her old dress.
Little Women, Louisa May Alcott

I've never given a book away before so it's about time I did.  Little Women is a perfect Christmas read and you can almost feel the New England snow as you read it.  This is a new Penguin Threads edition which features hand-stitched cover art.  I'll randomly pick a name from the commenters on this post to receive an early Christmas present!

I would love to have visited Asia House in London last month to hear Amy Tan talk about her new novel The Valley of Amazement on a rare visit to the UK, but I couldn't get the time off work.  I've written before about my admiration for Amy Tan.  The Joy Luck Club, The Kitchen God's Wife and most of all The Hundred Secret Senses are some of my favourite novels.

Sadly The Valley of Amazement is not vintage Tan.  It gets off to a great start with young Violet Minturn growing up in her mother's Shanghai courtesan house at the turn of the 20th century.  Tricked into becoming a courtesan herself she is befriended and protected by Magic Gourd the sparky former courtesan who knows all the tricks of the trade and tells it like it is.  There are quite explicit details about the degradation of women in courtesan houses and their will to survive.  This part of the novel is very powerful but when the story moves on to Violet's mother and her history it becomes formulaic, overlong and the ending is far too neat.

That said, Magic Gourd, the ageing courtesan with a heart of gold is a wonderful character who reminds me of Kwan from The Hundred Secret Senses.

Despite my aversion to 'weird twins' in fiction I very much enjoyed Curtis Sittenfeld's story of twins who share a gift for predicting dark events.  Sisterland is narrated by Kate who is married with children and tries to disown her gift.  The unconventional Vi positively embraces it and sets herself up as a psychic.  When she predicts an earthquake and becomes something of a small-town celebrity after appearing on the Today show, Kate whose husband works as a geological scientist and dismisses Vi's prediction as nonsense is deeply embarrassed.

Sittenfeld is particularly good on teenage angst and Kate's account of being invited to a slumber party at the age of 13 and messing around with a Ouija board which turns dark and ominous is very well written.  I won't give away the ending but I'll just say beware of October 16th!

2013 has been a great year for fiction.  Best of all was Donna Tartt's The Goldfinch of which more later.  Merry Christmas and see you all in the New Year!
Posted by Vintage Reading at 10:15 12 comments: