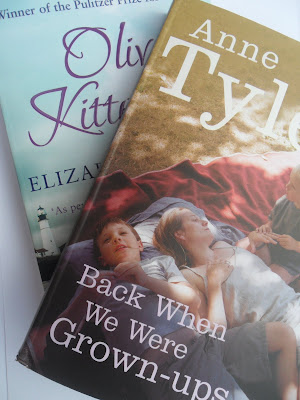 I always thought I would save literary festivals for when I retire but when I read that Anne Tyler will be attending the Sunday Times Oxford Literary Festival at Christchurch in April to receive an Outstanding Literary Achievement prize I couldn't resist ordering a ticket. If anyone else is planning to visit the festival do let me know and maybe we can meet for a latte!
Breathing Lessons is probably my favourite Tyler because of lovely Ira who is married to the infuriating Maggie. From the opening chapter where Maggie pulls out into the path of a Pepsi truck to the near-farcical scene at the races where Ira's obsessive sister lines up marshmallows along the seats of the bleachers, Breathing Lessons is a perfectly pitched comic novel and like the best comic novels it is sad, too. Tyler never intervenes to judge or comment on the actions of her characters she just lets the story unfold and the characters find their own solutions or compromises.
I also liked Noah's Compass. At the age of 60, Liam Pennywell is made redundant from his job as a high school lecturer. He moves to a smaller flat in a less desirable area of town and while asleep in bed is attacked and robbed. Waking in hospital he is infuriated that he remembers nothing of the crime or his assailant. He then meets and falls in love with a younger woman who works as a 'professional rememberer' for an elderly wealthy business man, remembering names and events on his behalf. What I particularly enjoyed about this novel was the character of his younger daughter, Kitty, who drifts in and out of his flat wearing a mirror 'the size of a dime' in her pierced naval and talking into a mobile phone so tiny he 'wonders how it can stretch between mouth and ear.'
I finished Back When We Were Grownups last night and now I really will make a start on Olive Kitteridge ...
Posted by Vintage Reading at 10:04 6 comments: 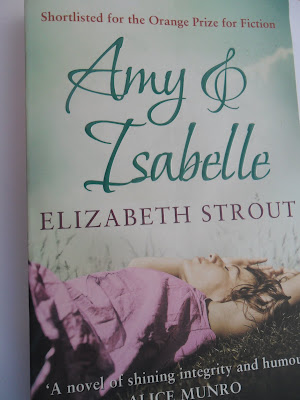 Oh Elizabeth Strout is a good writer. I bought Amy and Isabelle after reading an on-line interview with Anne Tyler who said that she admired it.

Fifteen-year old Amy and her mother live at Oyster Point, the posh end of Shirley Falls, Maine. Single mother Isabelle doesn't have the confidence or means to mix with the well-heeled wives of the neighbourhood. Lonely Amy embarks on a relationship with her charismatic maths teacher who seduces her by quoting the poetry of Edna St Vincent Millay. Meanwhile the soapy, sudsy river which divides Shirley Falls churns around the mill where Isabelle works as a secretary and the women in the office bicker and gossip.
There are many wonderful moments in this novel - Isabelle and Amy sharing doughnuts in the steamy coffee shop and Amy's fleeting moment of happiness, Isabelle trying to improve her mind by reading Madame Bovary which the women in the mill nickname 'Madame Ovary', kind Fat Bev's battles with her digestion and the way the river reflects the events of the novel. There is also the recurring motif of a missing 12-year-old girl which turns the novel almost into a thriller at the end.
Strout is an earthier writer than Tyler (her characters say f**k!) but has the same gift for dialogue and humour. I've ordered her novel Abide With Me and Olive Kitteridge a collection of short stories, both set in Maine. Do let me know if you've read Elizabeth Strout, I'm sure I've seen reviews of Olive Kitteridge around the blogosphere but can't remember where. I'd like to re-read them.
Posted by Vintage Reading at 15:05 12 comments: