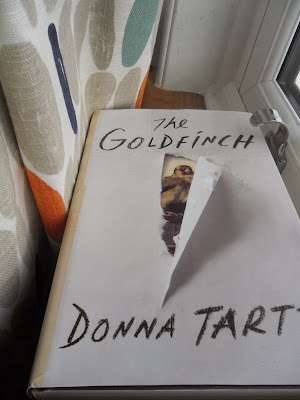 I do like a bit of superior chicklit and Helen Fielding's Bridget Jones-Mad About The Boy certainly had its moments and made me laugh a few times but I have to say I was yearning to read something a bit more substantial by the time I got to the end.

My big autumn read is The Goldfinch by Donna Tartt.  As I have not read The Secret History or The Little Friend I have no preconceptions about this writer but John Mullan's Ten Reasons why we love Donna Tartt's The Secret History from The Guardian a couple of weeks ago makes it sound very enticing.  I do like novels set in academia.

I'm about two hundred page in and it's very promising.  I liked the first chapter which is set in Amsterdam:


Outside, all was activity and cheer.  It was Christmas, lights twinkling on the canal bridges at night; red-cheeked dames et heren, scarves flying in the icy wind, clattered down the cobblestones with Christmas trees lashed to the backs of their bicycles.  In the afternoons, an amateur band played Christmas carols that hung tinny and fragile in the winter air. Donna Tartt The Goldfinch

I also loved the descriptions of Dutch paintings in a New York art gallery with 'peeled lemons, with the rind slightly hardened at the knife's edge, the greenish shadow of a patch of mold.'  The book has been described as Dickensian in some reviews and its central character has been likened to Holden Caulfield from J D Salinger's The Catcher in the Rye in others.  I'll reserve judgement until I've read it  and at over 700 pages I may be a while!

Anybody read The Secret History?
Posted by Vintage Reading at 09:56 15 comments: