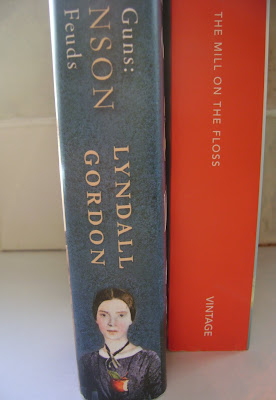 Even if you are unfamiliar with the poetry of Emily Dickinson this biography is an absorbing read with a strong cast of characters. There is the enigma of Emily herself. Austin the handsome and austere Heathcliff-like brother. Vinny (Lavinia) the charming younger sister. Sue Dickinson the literary sister-in-law next door, married to Austin and probably the closest person to Emily. Then there is Mabel Loomis Todd, the interloper.
Beautiful, ambitious and pushy, Mabel is drawn to the mysterious poet and keen to move in literary circles. Shunned by Emily she begins a passionate affair with Austin causing untold misery to the families living side-by-side.
Lyndall Gordon makes a convincing case that Emily Dickinson's infamous seclusion was not necessarily entirely voluntary. She suffered from severe epileptic fits which, at that time, would not have been acceptable in the social circles of Amherst, New England. In fact, Emily's active inward life contrasted with domesticity. She made the family bread 'because her father preferred it' and kept a flourishing conservatory.
After Emily's death, Mabel Loomis Todd finds her vocation, painstakingly cataloguing, copying and editing the hundreds of poems which Emily had written on scraps of paper, shopping lists and receipts. I love the idea of great poetry written on discarded paper - no fancy moleskine notebooks required!
Gordon presents a balanced view of Mabel Loomis Todd. Certainly she was ambitious and adulterous, but her skills as an editor and her recognition of Emily's genius ensured that the poems are available to us today.
Dickinson greatly admired George Eliot and and this has made me want to re-read The Mill on The Floss. As it's over six hundred pages - I may be a while! Meanwhile, here's a lovely wintery review of The Mill on the Floss from Frisbee: A Book Journal and if anyone could recommend a good biography of George Eliot it would be much appreciated.
Posted by Vintage Reading at 11:45 14 comments: 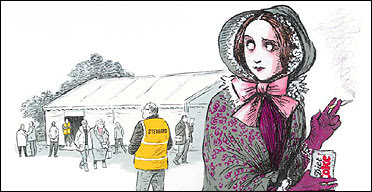 Latest Waterstones irritation: buying a copy of Helen Simpson's new collection of short stories In-flight Entertainment and the assistant telling me that because I'd spent over £10.00 I was entitled to a half-price copy of a new chicklit type novel which he held up for my perusal. I told him I've nothing against superior chick-lit (loved The Nanny Diaries) but I'd rather choose a title myself or why not a half-price Jane Austen novel? Sadly he declined.

A new book from Helen Simpson is always a delight and this collection contains a wonderful story called The Festival of the Immortals where long-dead writers attend a modern literary festival. Charlotte Bronte is booked to read extracts from Villette and two women queueing for the tea tent are anticipating what she will be like. This story was published in The Guardian with a delicious illustration by Posy Simmonds and you can read it here.

I Prefer Reading has an excellent post on Helen Simpson. I'm off to finish the Emily Dickinson biography which is the best book I've read this year.
Posted by Vintage Reading at 09:59 8 comments: 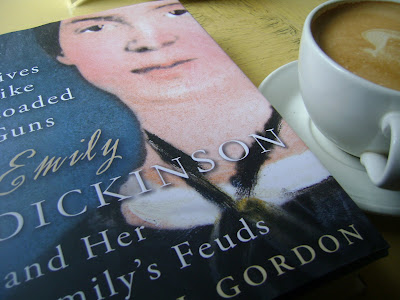 I'm completely absorbed in Lyndall Gordon's Lives Like Loaded Guns - Emily Dickinson and Her Family's Feuds. It's an extraordinary biography which reads like a novel. Emily Dickinson's early reading and influences included the Bronte sisters, Elizabeth Barrett Browning and George Eliot, particularly Maggie Tulliver from The Mill on the Floss. I love the thought of Dickinson and her sister-in-law Sue avidly reading all the new publications from England.
Posted by Vintage Reading at 16:12 9 comments: 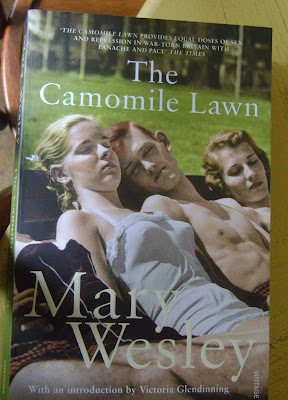 Helena Cuthbertson picked up the crumpled Times by her sleeping husband and went to the flower room to iron it.

Oh to have a flower room and the time to iron the papers! The Camomile Lawn has all the elements of a perfect novel. A big house overlooking the sea in Cornwall with a scented camomile lawn that slopes down to the coastal path. Helena and Richard lounging in their sunny garden, bickering over the newspapers and awaiting the arrival of their nephews and nieces. Polly, Walter, Calypso and Oliver, beautiful, young and amorous, arriving on the London train looking forward to their annual Penzance holiday. Ten-year old Sophie hiding on a branch up in the Ilex tree listening in to adult conversations. Plans for swimming in the cove, sunbathing and resurrecting Oliver's favourite game The Terror Run. All set against the gathering momentum of 1939 and the outbreak of World War 2.
Strange that we strongly associate Daphne Du Maurier with Cornwall, but not so much Mary Wesley. The Book Whisperer has an enticing review of another Wesley novel Part of the Furniture which I'd like to read. I've also recently been enjoying the posts and stunning photography on The Blue Cabin blog, admiring this yoga room and resolving to make more time for yoga like this fabulous lady. Trouble is, whenever I have some free time I pick up a book ...
Posted by Vintage Reading at 14:18 15 comments: