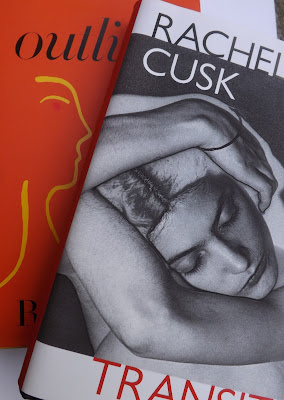 Next year will be the bicentenary of the death of Jane Austen and there are one or two events which have caught my eye.  In January The British Library will be putting on an exhibition of her teenage writings and opinions on her books from friends and family.  It's a wonderful opportunity to see her exquisite handwriting.  2017 will also be the bicentenary of Persuasion and if I was in North Carolina I would love to go to this.  I was also interested in the news this week that the attractive Rice portrait, said to be of Jane Austen, went on display to members of the Cambridge Jane Austen Society.  I must either join a Jane Austen society or start one in my area!

I've just read Rachel Cusk’s Transit which is the second volume of a trilogy which began with Outline in which a writer travels to Athens to teach a creative writing course following a relationship break-down. Beyond the fact that she is a wife and mother and her name is Faye we are told little about the narrator and Transit is relayed in the same spare style:


In that time I studied the cafe’s interior. With its bookshelves and aubergine-painted walls and antique furniture, it gave an impression of age and character while being, in fact, both generic and new.

The writer has now moved back to London with her sons and she begins the process of renovating a London house but has to contend with a deeply unpleasant couple who live in the basement of the property.  Episodes in her daily life - some sad, some funny - are relayed in a deadpan style.  She participates in a literary festival where the guest writers get soaked running to the tent in the rain and later gets propositioned by the Chair. A visit to the hairdresser where the brilliantly lit opulent interior of the salon contrasts with the dark winter’s day outside and the heavy traffic on the streets rattle the hair products on the glass shelves. Conversing with her Albanian builder, meeting a friend for coffee who seems to thrive on chaos and is actually exhilarated when the sprinkler system accidentally comes on in her apartment and soaks all her belongings. In the final chapter, amidst a nightmare dinner party, we get some insights and reflections on the ending of the narrator’s own marriage.
I would recommend this beautifully written novel and I look forward to the third volume.  To escape the seasonal commercialism I think I will re-read Emma.  What are your reading plans?
Posted by Vintage Reading at 09:26 5 comments: