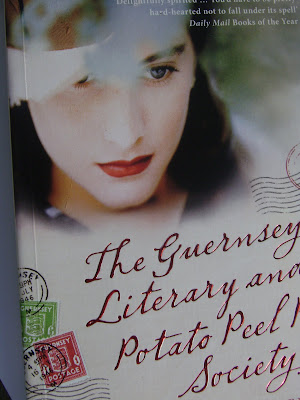 London, 1946. Julia Ashton, popular light-hearted journalist and unsuccessful biographer of Anne Bronte, receives a letter from a man in Guernsey who is reading a book she once owned. Charmed by the letter and fascinated by life in occupied Guernsey, Julia begins corresponding with other members of the Guernsey Literary and Potato Peel Pie Society. This leads to her visiting the island with a view to writing a book about the origins of the society and the tragic life of one of its members, Elizabeth McKenna.

For some reason I wasn't as taken with this book as I hoped I would be. The harrowing details of life in Guernsey during the war and the fate of those who were sent to concentration camps were vividly described and so sad to read. By contrast there were lots of delicious details - I loved Isolda's discovery of Jane Austen, Peter Sawyer's desperation to see a picture of Rita Hayworth and Sidney Stark the charming publisher.
It was Julia herself I didn't find plausible. Just didn't buy the fact that she would relocate to Guernsey and bring up another woman's daughter as her own on the basis of a short visit even allowing for the exigencies of wartime. Perhaps it was the epistolary form that was the problem, but I couldn't help feeling that after Julia had completed her book her interest in the island and its inhabitants would wane.
I feel my blog is a little lacking in Jane Austen lately which I intend to rectify very soon! Meanwhile here is a link to a lovely Austen post from Book Snob.
Posted by Vintage Reading at 12:00 15 comments:

A Gate at the Stairs 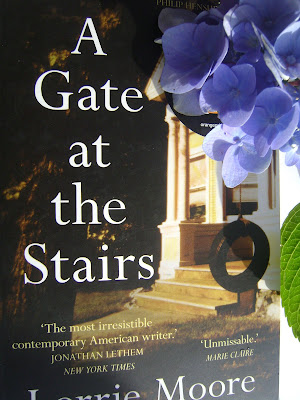 Reader, I did not even have coffee with him.
That much I learned in college.

From the literary Jane Eyre and Agnes Grey to the superior chick-lit of The Nanny Diaries, I do like a good governess novel.
Tassie Keltjin, a farmer's daughter, leaves home to attend university. Looking for childcare work to supplement her income she is interviewed by Sarah Brink, a woman in her mid-forties who is planning to adopt a child. Hiring her immediately without seeming to check her references Sarah asks Tassie to accompany her through the traumatic process of meeting a mother who is giving up her baby for adoption.
Emmie, the child Sarah eventually adopts is mixed race and almost two years old. Tassie adores the child and admires the smart, liberal and educated Sarah who runs a restaurant. She is more ambivalent about Sarah's vain husband Edward. Gradually the story of Sarah and Edward unfolds and Tassie faces the realisation that people are not what they seem.
I like this sparky interview with Lorrie Moore in which she gives the interviewer as good as she gets.
In the mood for more contemporary fiction by American women I'm thinking of reading Donna Tartt's The Secret History. Anyone read this?
Posted by Vintage Reading at 18:24 11 comments: 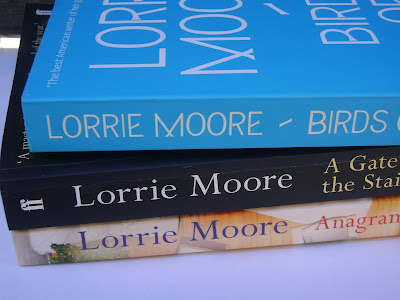 My summer reading staycation continues. I've run out of Rumer Godden titles and I need some contrast so I've been reading novels by American women writers, both vintage and contemporary.

Eudora Welty has been on my radar for a long time and I found a vintage Virago for the princely sum of £1.99 at the Oxfam bookstore. The Optimist's Daughter is a sensitive and beautifully written short novel about a women trying to cope with the death of her father and sustain a relationship with his vulgar, ill-bred wife. A Work in Progress has a very good Eudora Welty post.

I've shamefully neglected Lorrie Moore since I read her collection of short stories, Self-Help, waaaaay back in the eighties. A Gate at the Stairs is one of the best novels I've read this year. I jut can't put it down and I'll post a review when I'm through.

Note to publishers: if you must put a sticker on a book, don't emboss it into the cover, make it a peel off one. I don't care if it's nominated for the Orange Prize or Richard & Judy like it or it's on 3-for-2 offer. Books are aesthetically pleasing objects in themselves and I don't want a dumb sticker on it that I can't remove!
Posted by Vintage Reading at 10:02 11 comments: 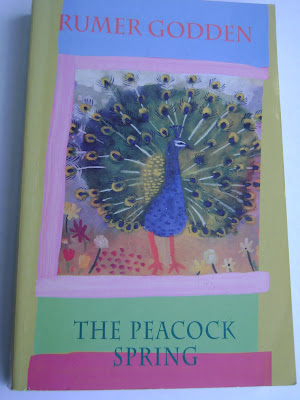 Half-sisters Hal and Una Gwithiam are suddenly withdrawn from their expensive British boarding school by their diplomat father who requires them to join him in India. The younger sister Hal (short for Halcyon) is delighted to leave school but Una, who excels at her studies wants to stay and take a maths exam.
Arriving in India, the sisters are met by Alix, the glamorous Eurasian governess their father has hired to teach them. The prickly Una, furious at her father and feeling that, at fifteen, she is far too old for a governess soon discovers that Alix is not competent to teach her maths at the level she requires.
Alix attempts to become friends with the girls, arranging riding lessons and social evenings for them but is continually rebuffed as the sisters gradually become aware that their presence in India is only required to make their father's relationship with the governess appear respectable.
Jealous of Alix, resentful of her father and missing 'Crackers' her former headmistress and the only mother figure she has ever had, Una begins to take refuge in an old summer house at the bottom of their exotic garden where she meets the handsome young Indian gardener who is also a poet and he helps her to forget about her maths.
Godden excels at coming-of-age stories and is not coy about providing the physical details of nausea, menses and sexual awakening. She also provides characters with depth. Una at times is stroppy and headstrong and Alix is possibly one of the worst step-mothers-to-be ever created in fiction, yet when Una desperately needs someone on her side it is Alix who finally roots for her.
Posted by Vintage Reading at 10:15 16 comments: 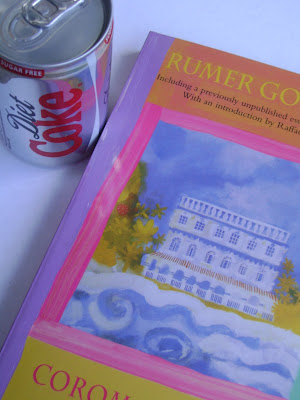 Blaise and Mary spend their honeymoon at Patna Hall, an Indian hotel on the Coromandel coast. Mary is entranced by the blue morning glory, the green parakeets and mynah birds and giant waves of the sea. She becomes very close to the hotel staff and guests and its owner, Auntie Sanni. She also becomes friends with Krishnan Bhanj who is running for election as the candidate for the Root and Flower Party.
Social climber Blaise is jealous of Mary's affinity with India and suspicious of her innocent friendship with Krishan Bhanj while Mary becomes increasingly disillusioned with her selfish husband and wonders if, at eighteen, she has married too young.
There are vivid scenes of Mary chrystallising cherries and making Mrs Beeton's Pretty Orange Pudding in the hotel's confectionery pantry with Auntie Sanni, helping to wash a decorated elephant on the beach and dressing as the goddess Radha on one of the election floats to help Krishnan with his campaign.
I liked Raffaella Barker's introduction to this book. She recalls reading The Greengage Summer at twelve and makes the interesting point that Rumer Godden is such a gifted writer that the books you love as a teenager are also satisfying on a different level when re-read as an adult.
I've ordered Black Narcissus and Kingfishers Catch Fire. Think I'll have a little staycation and read them in the garden in the summer sunshine.
Posted by Vintage Reading at 10:22 9 comments: