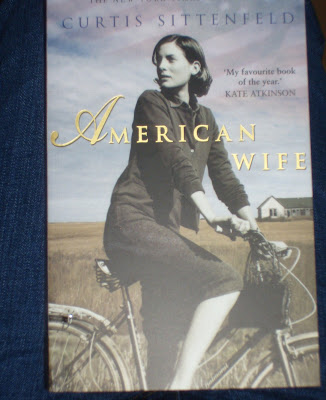 I have followed the career of the young American writer, Curtis Sittenfeld, ever since I read Prep a few years ago, so I was delighted when I received her new novel American Wife as a Christmas present and I didn't even drop any hints!

Prep is a contemporary version of the classic boarding school book. I thought it was highly original and extremely well-written although it may not be everybody's cup of tea.* I really liked her second book, The Man of My Dreams, too. I'll let you know how I get on with American Wife. It has over 500 pages so I may be a while ...

* Prep does have a couple of very descriptive sex scenes;-)
Posted by Vintage Reading at 11:09 5 comments: 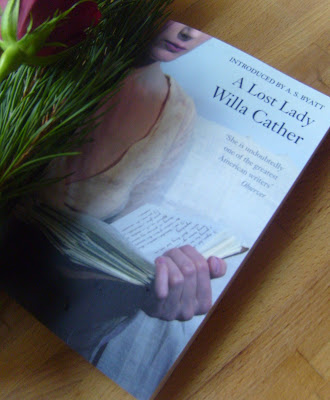 She stood beside his desk in her long sealskin coat and cap, a crimson scarf showing above the collar, a little brown veil with spots tied over her eyes. The veil did not in the least obscure those beautiful eyes, dark and full of light, set under a low white forehead and arching eyebrows. The frosty air had brought no colour to her cheeks - her skin had always the fragrant, crystalline whiteness of white lilacs.

This is the bewitching Marian Forrester in Willa Cather's 1923 novel A Lost Lady. Beautiful, vivacious and the perfect hostess she charms and seduces her way through life. A Lost Lady examines the passing of the old order, the great conquering men of the pioneer period are losing out to shrewd young men without respect for the landscape. It is only when her wealthy and honourable husband loses his money and his health that Marian Forrester begins to come undone ...

I read this in two or three sittings over the Christmas break (it helped that I didn't have to go to work!) Another excellent Willa Cather novel. 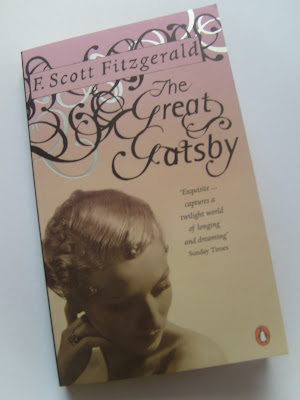 ... is the famously romantic dedication inside The Great Gatsby. The very nice reading blog Shelf Love recently posted about Gerald and Sarah Murphy who inspired the characters of Dick Diver and Nicole in Tender is the Night. This made me want to re-read some F. Scott Fitzgerald so I've replaced my battered old edition of Gatsby.

Finished Home by Marilynne Robinson. Arguably, Home is Gilead from a different point of view. It's dialogue driven and centres around the characters of John Boughton, his wayward son Jack and daughter, Glory. It's a beautifully written novel, but I have to say I much prefer Gilead.
Merry Christmas everyone and I hope you all manage to squeeze in some reading time over the festive season!
Posted by Vintage Reading at 15:05 6 comments:

The carnations that is. Hardbacks are rather more expensive. I went to Waterstone's to buy Home by Marilynne Robinson and it was £16.99 which I thought was rather a lot so I went to Borders and got it for £12.99. I think I'm going to have to cut back on my hardback consumption next year. I've been re-reading Gilead this week in preparation for Home which I'm hoping to start tonight when I've done the ironing and written my Christmas cards and sorted out school uniforms and sports bags! You know how it is.
Posted by Vintage Reading at 10:40 6 comments: 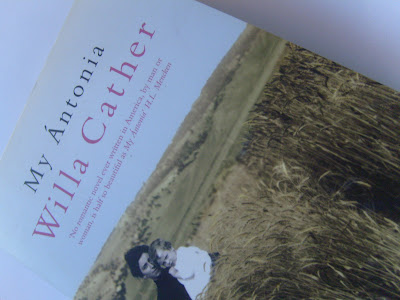 Re-reading Marilynne Robinson's Gilead this week made me want to go back to Willa Cather's My Antonia. My Antonia is a stunning novel based on Cather's childhood memories of Red Cloud, Nebraska. Jim Burden is sent to live with his grandparents on their farm in Nebraska, a place where the long waving grass resembles the sea and trees are a rare and unfamiliar sight on the flat landscape. One of his childhood friends is Antonia Shimerda the young daughter of poverty-stricken Bohemian immigrants. Although Jim eventually moves to New York he never forgets his childhood friend and one day he goes back to look for her. Here's an extract:

As I looked about me I felt that the grass was the country as the water is the sea. The red of the grass made all the great prairie the colour of wine-stains, or of certain seaweeds when they are first washed up. And there was so much motion in it; the whole country seemed, somehow, to be running. 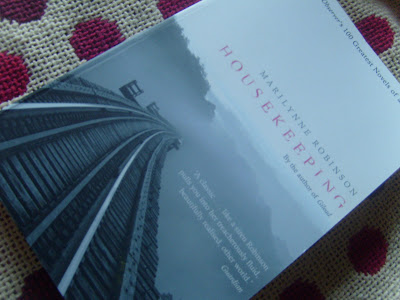 Young sisters, Ruth and Lucille , are left on their grandmother's porch by their mother who then drives her car into a lake. This may or may not be suicide. After their grandmother's death, the girls are briefly cared for by two elderly spinsters until their mother's younger sister, Sylvie, inherits the house. Thirty-five year old Sylvie has been a transient or drifter and finds it hard to settle to domesticity although she is very fond of her nieces. Sylvie has the deeply entrenched habits of a drifter, she sleeps fully dressed with her shoes under the pillow, she pins a twenty-dollar bill to the inside of her coat and she is prone to wandering in the dark, 'borrowing' boats and rowing across the lake, laying on park benches and hitching rides on freight trains. Desperate to conform, Lucille eventually goes to live with her school-teacher so that she can be like other girls. Ruth, however, has the nature of a transient and she wants to stay with Sylvie.
Housekeeping is beautifully written with an absorbing story. For some reason the character of Sylvie reminded me of certain characters in Anne Tyler novels. Particularly Muriel the dog trainer in The Accidental Tourist. Sylvie teaches Ruth and Lucille what it is to be an individual. Here's an extract. Lucille and Ruth are looking up the word pinking-shears in an old dictionary and find it full of pressed flowers:

I opened to P. At that place there were five dried pansies - one yellow, one blue-black, one mahogany, one violet, one parchment. They were flat and still and dry - as rigid as butterfly wings, but much more fragile. At Q I found a sprig of Queen Anne's lace, which was smashed flat and looked very like dill. At R I found a variety of roses, red roses, which had warped the page on each side a little to their shape, and pink wild roses.