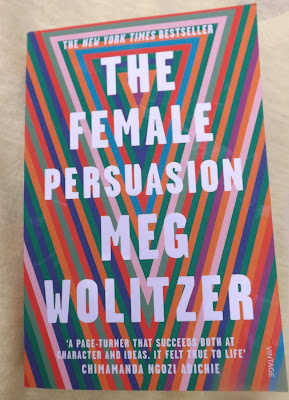 I loved Meg Wolitzer's last novel The Interestings.  Particularly the summer camp for gifted teenagers Spirit-in-the-woods and her evocation of the 1970s.  Her latest novel The Female Persuasion has just been published in paperback.  The reviews described it as a feminist or #MeToo novel and I wasn't sure if it was for me as I'm not keen on novels which are heavily based on issues. It's probably why I like Anne Tyler so much as her focus is usually on families who are out of step with each other and the passing of time.

I needn't have worried though, because The Female Persuasion is a big sweeping story with love, tragedy, ambition and compromise.  It starts off as a bit of a campus novel - I love a campus novel!  The central character Greer is bright and likeable but lacks confidence.  An introspective teen who was saved by books as a child.  After an unpleasant incident at a fresher party and a visit to her campus by a renowned and charismatic feminist Greer finds her focus and a heroine.

The feminist Faith Frank is an interesting character.  Active during the second wave of feminism in the 1970s she is now slightly out of step with social media and herself the target of snide internet comments.  Still glamorous and active in the movement she has had to learn to compromise.  I kept thinking she must be based on Gloria Steinem but it is never stated.

Everyone grows and changes in this novel - Greer's adorable boyfriend Cory and her best friend Zee and Greer herself learns that sometimes your heroines have feet of clay.

An immersive and enjoyable read.
Posted by Vintage Reading at 15:25 5 comments: