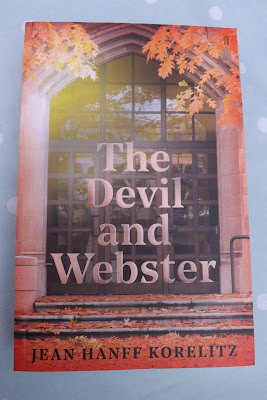 I do like the writing style of Jean Hanff Korelitz. She has a gift for describing clothes and food and interiors and I like all that detail. You may be familiar with Admission her enjoyable 2009 novel about the competitive world of Ivy League college admission. The new novel The Devil and Webster returns to academia and the central character is Naomi Roth whose career trajectory has taken her from professor to dean to President of Webster, a New England college with a rising reputation. Politically engaged, Naomi has raised a strong-minded daughter, Hannah, now a sophomore at Webster.


When a student protest arises after a popular professor is 'let go’ following a plagiarism charge Naomi - perhaps nostalgic for her own student days - allows it to go on too long and gain too much momentum and it begins to threaten her relationship with her daughter and her own career.

Well, what I thought would happen in this novel did happen and then something I wasn’t expecting also happened so I was rapidly turning the pages until the end! I loved this description of Naomi lying in the bath trying to read a much-hyped novel by a former graduate:


She climbed into the deep 1920s tub, and the rising heat made it ever more difficult to follow the novel’s story: a missing briefcase full of something. A formula? A code? The paper-thin female character, decribed with a leering male eye, insufferably perky. She hoped that the author did not go around crediting the creative writing teachers he’d studied with a Webster, nof for this. A car chase, cinematically described. The hero’s name was Chance. Of course it was. Jean Hanff Korelitz


I’ve been to Brighton for my daughter’s graduation ceremony and I also managed to catch the Jane Austen By The Sea exhibition at Brighton Pavilion. It was amazing to see drafts of Sanditon in her meticulous handwriting and very poignant to see a lock of her hair which had faded from its original auburn to blonde.  It's a small exhibition but worth seeing and it's on until January 2018.
Posted by Vintage Reading at 10:17 4 comments: