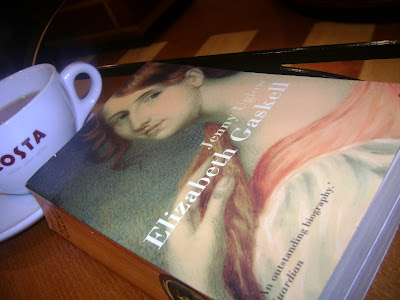 My photos may give the impression that I spend all my time sitting in Costa* reading, but I have a family and work Mon-Thurs. Friday is my day off and that is the day I like to lounge around reading, then saunter into town and browse the bookshops and sit in a coffee shop and read a bit more before the onset of the weekend.
Which is a roundabout way of saying that I still haven't finished the 600+ pages of Wives and Daughters. I'm about half-way through and I can understand why Charles Dickens referred to Elizabeth Gaskell as a 'bewitching Scheherazade'. I've also borrowed Jenny Uglow's biography of Gaskell from the library. Not to read cover to cover as I prefer to read fiction but I want to dip into it and discover a little more about her life.
* ... and Costa needs to watch out! Anymore "Would I like a muffin with that or how about a Costa loyalty card?" and I may take my considerable coffee drinking capacity elsewhere!
Posted by Vintage Reading at 09:51 17 comments: 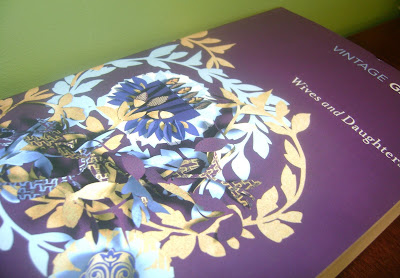 And she had found her way into the library, and used to undo the heavy bars of the shutters if the housemaid had forgotten this duty, and mount the ladder sitting on the steps for an hour at a time, deep in some book of the old English classics. The summer days were very short to this happy girl of seventeen.

Nothing like having a reading plan and then immediately deviating from it. I initially wanted to read Elizabeth Gaskells's Wives and Daughters because she mentions Maria Edgeworth, but I've got completely absorbed in the story and can't put it down. I've also been inspired by Elaine's post on Vic Lit (love that phrase) Girlebooks review of Wives and Daughters and several of your comments recommending Gaskell.

The Three Weissmanns of Westport 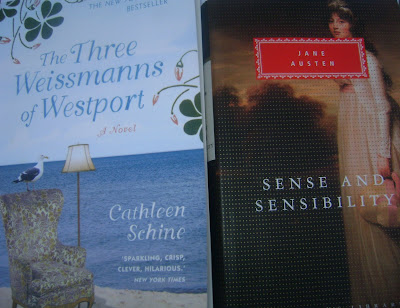 I was looking forward to reading Cathleen Schine's novel The Three Weissmanns of Westport because it's a contemporary novel which mirrors the characters and events of Sense and Sensibility. It was a New York Times bestseller and has had some very positive reviews in the UK press. I was hoping for a novel with the sophistication of Karen Joy Fowler's The Jane Austen Book Group but sadly I was disappointed.

The novel begins with the wealthy Mr Weissman telling his 75-year old wife he wants a divorce and she must leave their beautiful New York apartment. A gregarious cousin offers her a run-down cottage in Westport overlooking Long Island Sound. Betty's two middle-age daughters, Miranda and Annie, decide to move with her to escape their own troubled lives. The impetuous and romantic Miranda has seen her literary agency which specialises in 'misery memoirs' fail spectacularly and sensible Annie is suffering from empty nest syndrome now her sons have left home.

Of course, Annie represents Elinor Dashword, Miranda is Marianne, Betty Weissman is Mrs Dashwood and the sociable cousin Sir John Middleton. Marianne's accident in Sense and Sensiblity where she twists her ankle and is rescued by the handsome and unreliable Willoughby is transformed in this novel into a kayaking accident where Miranda is rescued from the sea by an equally handsome and unreliable younger man and an unlikely romance blossoms.

Of course, it's fun for Austen nerds like me to spot the similarities between this book and Sense and Sensibility and the novel certainly has its moments but I'd much rather read the original! 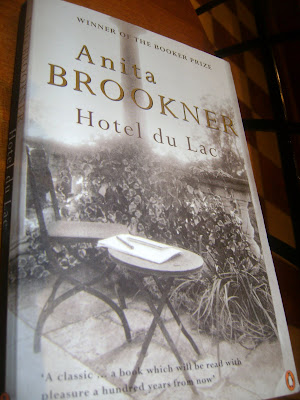 All I learned I learned from Father. Think again Edith. You have made a false equation.

I tried to read an Anita Brookner novel in my twenties and found it too ponderous and slow. Oh the foolishness of youth! Now I'm well into my forties I've finally got around to reading Hotel du Lac and can appreciate Brookner for the superb writer she is.
Edith, a romantic novelist, is sent by her friends to stay at the Hotel du Lac on the shores of Lake Geneva after she disgraces herself in polite London society (can't give anything away). She is intrigued by the summer inhabitants of the Hotel du Lac and finds unexpectedly that their lives encroach upon hers.
A beautifully written short novel, a hotel setting, a dedication to Rosamond Lehmann and a subtle and clever ending. Perfect!
Posted by Vintage Reading at 13:51 13 comments: 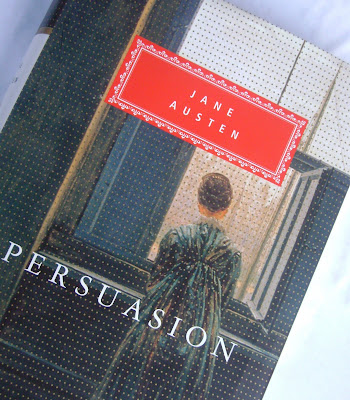 To my mind Persuasion is the most perfect novel. At just over 250 pages it can be read over a weekend but the haunting melancholy feel haunts you for days afterwards. It is a happy novel, too. It is about second chances and mistakes rectified.
Austen described Anne Elliot as 'almost too good for me' and Anne is indeed good, but without the annoying passivity of Fanny Price from Mansfield Park. Anne is older, wiser and damaged by the error of judgement she made eight years before in refusing to marry Captain Wentworth. My favourite scene from Persuasion is when Anne is walking on the Cobb at Lyme and a stranger turns to admire her regained beauty (the stranger, of course, turns out to be Mr Elliot).
Can you imagine any of Austen's heroes wearing a hooped petticoat for a joke?! Clarence Hervey does in Belinda in order to settle a bet with the gloriously bitchy Lady Delacour and it is the interplay between these two which make the novel so enjoyable.
Belinda Portman, beautiful, young, kind-hearted and naive is sent by her Aunt Stanhope (nicknamed 'catchmaker matchmaker') to stay with Lady Delacour in London with a view to landing a wealthy husband. Lady Delacour 'one of the most dissipated women in London' is vain, spendthrift, dazzling and witty in public and languid, petulant and weary in private. She is also hiding a breast wound she received in a duel which she believes will kill her.
One would think that under the guidance of Lady Delacour, Belinda would become hopelessly lost, but in fact the opposite is true. Though naive, Belinda is not short of common sense and she is attracted to a peaceable domesticity rather than the unhinged life of Lady Delacour. The two women eventually become close and loyal friends and Belinda falls in love with the charming Clarence Hervey.
I really want to re-read another Austen novel, now - so much for making plans! Sense and Sensibility I think.
Posted by Vintage Reading at 15:29 14 comments: