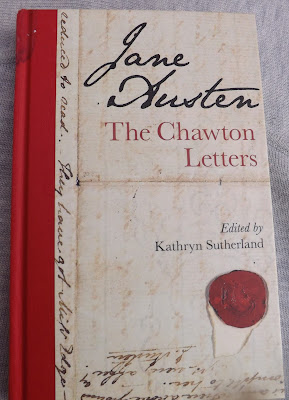 Well - I am come home from Mrs Lyson's as yellow as I went, you cannot like your yellow gown half so well as I do, nor a quarter neither. Letter to Cassandra. May 1801


Jane Austen’s letters clearly weren’t written with one eye on posterity so it’s always a slightly uncomfortable experience reading them.  As Anne Elliot ponders in Persuasion 'no private correspondence could bear the eyes of others.' This beautifully presented Bodleian Library publication is edited by Kathryn Sutherland and includes intriguing analysis of the way the letters were folded, sealed and cross-written along with examples of Austen’s exquisite handwriting.
Austen’s letters consist largely of domestic concerns, whinges about the weather, shopping, gossip about relatives and acquaintances and then you suddenly come across a concise observation which reminds you what a great writer she was.

My favourite letter in this collection was written to Cassandra on 24th January 1813 from Chawton cottage,  Jane is reading a publication about the Military Police and Institutions of the British Empire by Captain Charles Pasley of the Royal Engineers which she was initially reluctant to receive but is completely won over by the writer's wit and style and describes him as 'the first soldier I ever sighed for.'

Of course, in 1813, Pride and Prejudice was about to be published and her growing exuberance about her 'own darling Child' is charming to read.

Planning to re-read any Austen over the summer?
Posted by Vintage Reading at 14:34 6 comments: