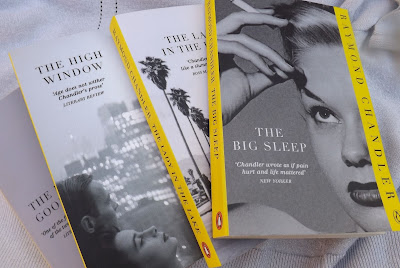 ‘Mostly I just kill time,’ he said. ‘and it dies hard.’
The Long Goodbye is, I think, Raymond Chandler’s best novel. I like the nods to Scott Fitzgerald, particularly in the portrayal of the tragic Gatsby-like Terry Lennox. I also liked the California setting of dusty eucalyptus trees and airless heat. The plot is sometimes utterly baffling but I don’t think Chandler is read for sophisticated plots. He is read for the attractiveness of his laconic private investigator Philip Marlowe and his mastery of the American vernacular.

The novel has a brilliant opening with Marlowe giving a drunken Terry Lennox a lift home when his wife drives off and abandons him outside a country club. This leads to a friendship - drinking gimlets (gin and lime juice) in Victor’s bar. When Lennox’s wealthy and adulterous wife is found murdered, Marlowe risks his private investigator’s licence by helping him escape to Mexico. After a few nights in jail having been framed by the corrupt police officers who pervade Chandler’s novels he is asked to locate a missing writer prone to go on alcoholic binges by his anxious wife which sends Marlowe off again on a search for a man who doesn’t particularly want to be found.


Terry Lennox drinks to forget the horrors of the war. The missing novelist is aware that his skills as a writer are declining and drinks to forget. Philip Marlowe’s advice to Terry Lennox for giving up drinking is an example of Chandler’s beautiful writing.
‘Usually it does. It’s a different world. You have to get used to a paler set of colours, a quieter lots of sounds. You have to allow for relapses. All the people you used to know will get to be just a little strange. You won’t even like most of them, and they won’t like you too well.’
Posted by Vintage Reading at 14:48 6 comments: