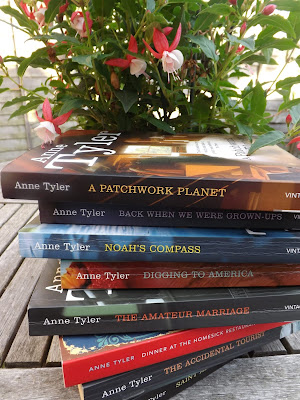 There were eleven full-time employees at Rent-a-Back. That meant nine people that I knew of had New Year’s plans. And these were not particularly successful people. Several might be looked upon as losers.

Anne Tyler’s charming novel A Patchwork Planet begins with a package delivered on a train to Philadelphia the day before New Year’s Eve and ends pretty much the same way. Barnaby Gaitlin is probably Tyler’s most attractive underachiever. His teenage penchant for breaking into neighbourhood houses to steal tiny mementos and rifling through photo albums results in a spell in a reform school for rich boys. Now almost thirty, he refuses to join the family firm and works for Rent-a-Back shifting furniture and doing odd jobs for the elderly and housebound.


Pretty much impervious to criticism from his ex-wife and appalling mother for not finishing his degree, living in a rented apartment, dressing like a tramp and working in a job without prospects Barnaby has an empathy which has the reader rooting for him from the start. When he goes to watch his daughter Opal’s ballet recital he feels for her ungainliness:

When they all set their heels together and pointed their toes sideways, she was the only one with no space showing between her thighs.


When he unpacks the Christmas decorations belonging to an old lady consisting of faded paper chains and a bent home-made aluminium star with no matching points he is overwhelmed with sadness and remembers why some of his workmates can’t stay in the job.


There is much comic relief though particularly in the dialogue between Barnaby and Martine, his Rentaback sidekick, who despite her petite stature, talks tough and drives the truck and the farcical plot involving a substantial sum of money hidden and retrieved in a flour bin more than once.  There is also one of Tyler's notorious family mealtimes at Thanksgiving where Barnaby's mother - a woman with something 'glittery and overwrought' about her excels herself in unpleasantness.
This is a lovely seasonal read. What is your favourite Anne Tyler novel?
Posted by Vintage Reading at 14:41 6 comments: