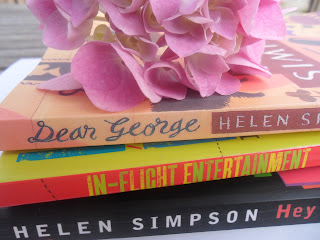 I sat up very late at the weekend to finish The Hunger Games which I couldn't put down. I've also finished three volumes of Helen Simpson's short stories and ordered another one.

From Hey Yeah Right Get a Life I particularly enjoyed Cheers where Lois goes into London to do some Christmas shopping and lunch with a friend, passing the afternoon in a flurry of 'packed shops and glitter and cash.' Despite her friend's near emotional breakdown over lunch and the abusive drunk on the train and the bus escapade on the way home which leaves her walking the frosty streets at midnight. Despite all that, she sees the Christmas trees lit up in the windows she passes and thinks of the rooms 'balmy with spice, evergreen and zest' and feels a surge of happiness.

Caput Apri is a magical story from the Dear George collection where an overbearing father relentlessly bullies his family one Christmas until his son slips a 'Discobiscuit' into his coffee. The hallucinogen seems to have the reverse effect and the father turns into a wild boar raging and hollering around the house until rescued by his long-suffering wife he is restored to humanity and becomes a loving father and husband. This is a clever tale within a tale told in the pub over mulled wine by three woman escaping a family Christmas.

There is a story in In-Flight Entertainment set in 2040 which is not so far from The Hunger Games. Diary of an Interesting Year is a nightmare vision of a dystopia where humans have to kill each other to survive. The story is relayed in diary form by a thirty year old female. In a post-capitalist world with the environment destroyed, sick of foraging and bartering for food, she dreams of soap and water, fresh air, condoms (there is a perpetual fear of pregnancy) and the days when she could order a pair of patent leather boots with a single click on the internet.

Anyone read the second volume of The Hunger Games trilogy? Do I need to steal borrow it from my daughter?
Posted by Vintage Reading at 12:29 11 comments: 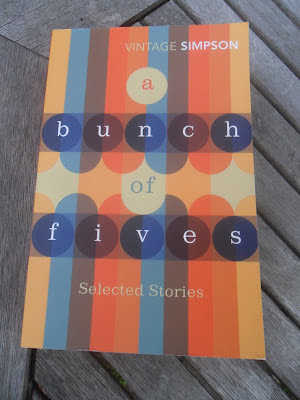 Very much enjoying the summer sunshine and London 2012. Did you see the tribute to children's literature lead by J K Rowling at the opening ceremony? I'm reading Helen Simpson's collection of her best short stories A Bunch of Fives. Something immensely satisfying about reading a perfect short story in one sitting. I've managed to squeeze in two or three stories every day amidst the coverage of the women's artistic gymnastics which I've avidly followed since Nadia Comeneci won gold at Montreal in 1976.

I've followed Helen Simpson's career since she published Hey Yeah Right Get a Life in 2001. This collection includes my favourite story Burns and the Bankers about a career woman at the top of her game who is seething with irritation at having to attend a banking federation dinner on Burns Night which drags on forever when she would rather be spending time with the four children she rarely sees. Initially bored with all the toasts to Rabbie Burns as her male colleagues get steadily drunk she becomes interested when an academic makes a speech about the life and loves of Burns.

Heavy Weather is a highly amusing yet wretched account of the toll of bringing up small children:


In life before the children, she had read books on the bus, in the bathroom, while eating, through television, under radio noise, in cafes. Now, if she picked one up, Lorna shouted 'Stop reading, Mummy,' and pulled her by the nose until she was looking into her small cross face.

I loved this account of a family holiday in Dorset with Frances trying to cope with a baby, a deeply jealous two-year old and a husband who cannot understand why she can no longer be spontaneous. I'm hoping that the elegant Russian gymnast Kseniia Afanaseva will win a gold medal in the floor exercise next week and that I'll be squeezing in a few more of Helen Simpson's wonderful stories.
Posted by Vintage Reading at 14:23 14 comments: