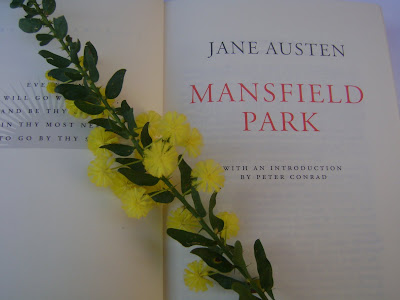 I have something in hand - which I hope on the credit of P&P will sell well, tho' not half so entertaining. Jane Austen letter to her brother, Frank, 1813

Edmund Bertram may not have the glamour of Mr Darcy but his kind heart makes him one of Austen's most appealing heroes. When ten-year-old Fanny, newly arrived at Mansfield Park, sobs on the staircase because she is homesick, Edmund takes the time to discover what is wrong and provides practical assistance supplying her with writing paper to send a letter home, ruling her lines and ensuring her letter is posted.
His anger at his mother for making the delicate Fanny cut the full-blown roses in the full heat of the sun and his good taste in finding the perfect gold chain for her amber cross demonstrates his continued care of Fanny even when he thinks he is in love with Mary Crawford.
Mansfield Park keeps us guessing until the very last pages. Will Fanny marry Henry Crawford and is he really so bad? Will Edmund marry Mary Crawford? Mansfield Park is Austen's mature masterpiece.
Bought a small potted mimosa acacia at the weekend. It's fluffy ball yellow flowers and vanilla smell make me feel that the long winter is over at last.
Posted by Vintage Reading at 12:47 10 comments: 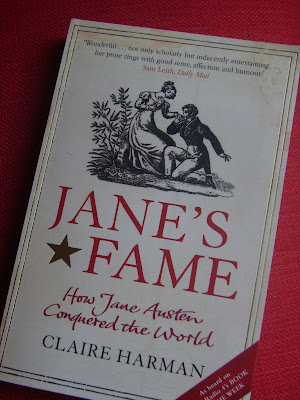 Last year I visited the National Portrait Gallery to see Cassandra Austen's drawing of her sister. When I finally located the miniature I was struck by the defensive arms across the chest attitude of the sitter who appeared reluctant to be drawn. Claire Harman gives a fascinating account of the history of this drawing in Jane's Fame.
The original was deemed 'too unattractive' to appear in a family memoir so a professional artist touched up the photo, enlarging the eyes, softening the face and adding a few frills. This wholly unrepresentative image has become 'beloved Jane' of the Austen industry. I must admit to a certain unease about the whole 'tote bags and T-shirts' thing yet I drink my tea from an Austen mug.
Harman is particularly good on cliched Austen film and TV adaptions and provides a wickedly amusing aside, worthy of Jane herself, on an American TV reality show based on Pride and Prejudice where young women compete to marry a wealthy bachelor. It later emerged that the wealthy bachelor was a dodgy penniless fraud.

It makes one wonder which part of Pride and Prejudice the producers had been thinking of - the Darcy-Elizabeth plot or Wickham and Lydia's.

As always, books about Austen make me want to return to the texts themselves. I'm supposed to be reading Stieg Larsson's The Girl Who Played With Fire for book group but I'm going to squeeze in a re-read of Mansfield Park first.
Posted by Vintage Reading at 20:15 6 comments: 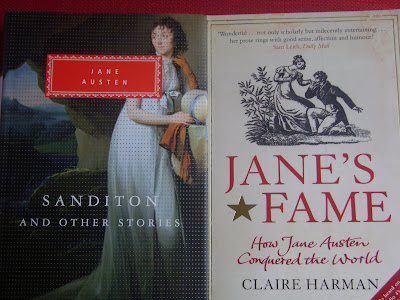 In spring my thoughts always turn to Austen and the thoughts of other book bloggers obviously do, too. Make Do And Read and Stuck In A Book have interesting posts up. I'm also looking forward to Sanditon week at Austenprose. At only seventy pages, Sanditon can be read in a couple of hours, but it is so frustrating not to know how this delicious novel would have developed. I loved Mr Parker's self-serving promotion of Sanditon as a fashionable watering place and his daft sister's exertions to secure lodgings for a 'lady whom she had never seen, and who had never employed her.'
Jane's Fame is out in paperback at last! A witty account of Austen's life and the 'cult of Jane' that has arisen since her death, it's a different approach to life writing to Hermione Lee's biography of Willa Cather which was very much a literary critique of her novels. I'm about halfway through and enjoying it very much - anybody else read this?
Posted by Vintage Reading at 11:49 13 comments: 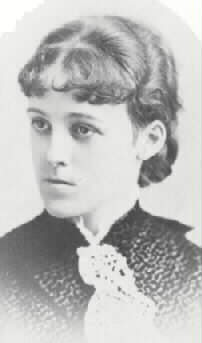 Undine's white and gold bedroom with sea-green panels and old rose carpet, looked along the Seventy-second street toward the leafless treetops of the Central Park.

Undine and her parents are living at the Hotel Stentorian in New York with the aim of moving among wealthy society. Undine is no Lily Bart. She is interested in all that is vulgar, expensive, bright and showy. This is echoed by her rather obvious beauty - bright red-gold hair and a high complexion. Completely self-centred and extravagant she drives her second husband, the lovely Ralph Marvell to suicide and flees from her third husband who is not quite such a pushover.
I loved Mrs Heeny, the cheerful manicurist and masseuse who keeps a sheaf of society newspaper clippings in her bag, knows all the latest gossip and is always warning Undine to Go Steady! I've read The Age of Innocence and The House of Mirth. Any suggestions which Wharton I should try next?
Browsing in Waterstone's today I was struck by a display of books for Mother's Day at the front of the store. Are all mothers only interested in expensive Cath Kidston craft books, books with cute kittens on the front and books about how to make cupcakes? I am so bored with cupcakes. A while back Waterstone's had a display of books by Japanese writers and they managed to put an Amy Tan novel amongst them!
Posted by Vintage Reading at 10:04 14 comments: