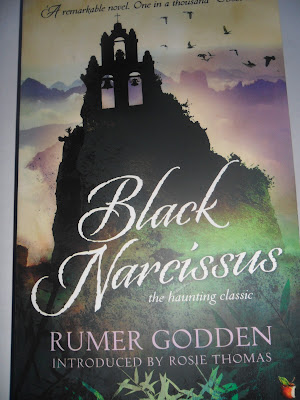 Black Narcissus is the story of five nuns setting up an order in a disused palace high in the Himalayas.  The house has a dubious reputation, only Ayah remains there and she says nothing.  Sister Clodagh is in charge, attractive and capable, it gradually emerges that she became a nun after her Irish sweetheart did not want to marry her.  Sister Philippa tends the garden, Sister Briony runs the dispensary, Sister Honey runs the lace school and Sister Ruth teaches the local children.

Mr Dean the English agent has spent many years in India and provides the carpentry, maintenance and building design for the nuns as well as offering practical advice which the nuns often choose to ignore.  Whether it is the high altitude of the Himalayas or the bad reputation of the palace something begins to affect the nuns.  Sister Phillipa becomes obsessed with ordering plants for the garden, Sister Clodagh keeps reliving her past in Ireland, Sister Honey yearns for a child of her own and Sister Ruth can't keep her eyes of Mr Dean.  Only Sister Briony remains the same.

Sister Ruth is a fascinating character.  Young and vulnerable, there is a suggestion that she became a nun after suffering some sort of mental illness.  She has glittering green eyes and is nicknamed the Snake-Faced Sister by Ayah.  She is convinced that Sister Clodagh likes Mr Dean and is bitter with jealousy.  Rumer Godden builds a tense, simmering atmosphere and events come to a head when a woman brings a dying baby to the dispensary.  Sister Honey tries to help the baby despite being warned by Mr Dean never to treat a dying child.  Sister Ruth then goes looking for Mr Dean ...can't say anymore or it will give the game away!

Rumer Godden wrote Black Narcissus on the upper birth of a ship travelling from India to England with her baby in the bunk below. She was just 32 when it was published in 1939.  It bought her money, fame, success and unhappiness, too.  You must read it.
Posted by Vintage Reading at 15:13 17 comments: 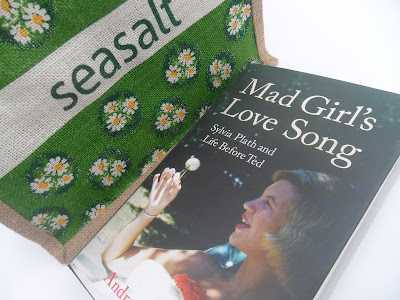 I do like a good literary biography and Andrew Wilson's account of Sylvia Plath's early years Mad Girl's Love Song is a very good biography with lots of intriguing detail.  This book should really be read alongside The Bell Jar as many of the events in the novel are autobiographical and the account of the first suicide attempt is particularly harrowing. No doubt, Plath was a tortured genius but there is light and humour in this biography

For example, on a trip to New York with boyfriend Richard Sassoon, Plath's suitcase is stolen from his parked car and some of her favourite belongings are taken - a blue cashmere sweater, a number of poetry books and her Chanel No 5.  When this is reported at the police station she becomes fascinated by the whole procedure and later composes the poem Item: Stolen, One Suitcase.

The book ends when Plath goes to Cambridge on a Fulbright scholarship and meets Ted Hughes.  I was left with a couple of lingering questions.  What happened to Eddie Cohen the young James Dean lookalike who kept up a long-term correspondence with Plath and acted as an informal critic of her work?  He seemed to be a voice of reason in her tumultuous life.  I also wondered why Plath seemed to dislike her mother so much. Aurelia was a highly intelligent woman who raised her children alone after the death of her husband.  She worked as a shorthand tutor to pay for their eduction.  There is a suggestion that her self-sacrifice created a constant sense of obligation in Sylvia which caused her resentment.

I now want to read a biography which covers the latter part of Plath's life and also some of the collections of her poetry if anyone has any recommendations.  I feel a reading project coming on ...

PS These jute bags by seasalt are very handy for lugging around heavy biographies!
Posted by Vintage Reading at 13:19 11 comments: 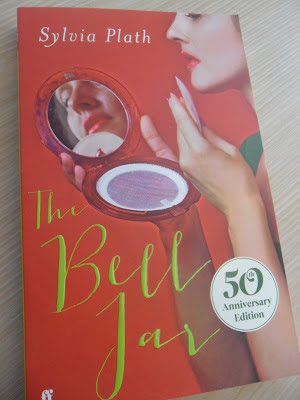 A couple of weeks ago Radio 4 serialised excerpts from Mad Girl's Love Song a new biography of Sylvia Plath's early life by Andrew Wilson.  I found myself completely drawn in and I've bought the book to read.  I've also just re-read The Bell Jar which has been re-issued with a controversial new cover for its 50th anniversary.

A high-achieving nineteen year old spends a summer in New York working as a journalist on a magazine.  One of several young women selected as fashion interns, Esther Greenwood is taken to parties, galleries and theatres, given clothes and gifts and is expected to appear in photo shoots and at luncheons.  Esther's experiences with men, alcohol and a bout of food poisoning exacerbate her inner conflicts about the possibilities and limitations for educated women in the 1950's.

On her return from New York, failure to secure a place on a writing course triggers a descent into mental illness and harrowing 1950's treatment for depression including electric shock treatment.  One doesn't usually associate Sylvia Plath with humour but I liked Esther's dark sarcasm:

The Bell Jar is a great modern classic.  Yes, it's dark but sometimes we need to read about life as it is.  What do you think?
Posted by Vintage Reading at 15:27 14 comments: