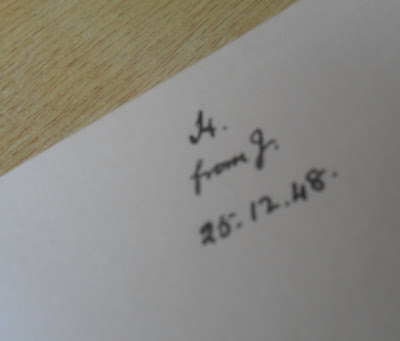 Found Jane Austen by Elizabeth Jenkins in my local second hand bookshop. I'm intrigued by the handwritten inscription and very much hope that "H" was fond of Austen and delighted to receive this book as a gift from "J" on Christmas Day, 1948.

While I think that Claire Tomalin's Jane Austen -A Life is the definitive Austen biography, Elizabeth Jenkins' uses her experience as a novelist to provide a unique insight into Austen's genius and her polished style makes this book a real pleasure to read.
When Jenkins' describes 'the brilliant perfection of Pride and Prejudice, sixteen years maturing in the mind of an unequalled artist' and the 'peculiar loveliness of Sense and Sensibility' it makes you want to immediately re-read them.
Talking of which, this year is the 200th anniversary of the publication of Sense and Sensibility. Anyone planning a re-read?
Posted by Vintage Reading at 08:54 20 comments: 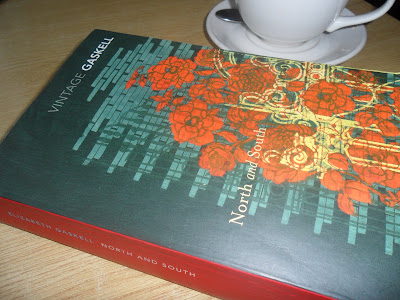 Described by Jenny Uglow as 'sexy, vivid and full of suspense' North and South is a compelling novel with magnetic central characters.
Margaret Hale's father has a crisis of faith and removes his family from their beloved New Forest to Milton, a manufacturing town in Manchester. Dismayed by the smoky industrial landscape Margaret's mother becomes ill. Her father takes in students and one of them is the powerful cotton-mill owner John Thornton.
Hypnotised by Margaret's dark beauty, dignity and scornful disdain of capitalism he falls in love with her. Margaret befriends a local girl, Bessy, who is dying as a consequence of breathing in the dust when she worked at the cotton mills:

'Fluff,' repeated Bessy. 'Little bits as fly off fro' the cotton, when they're carding it, and fill the air till it looks all fine white dust. They say it winds round the lungs and tightens them up. Anyhow there's many a one as works in the carding room, that falls in a waste, coughing and spitting blood, because they're just poisoned by the fluff.'

After Margaret protects him during a riot by the workers on strike and is injured in the process, Thornton declares his love and is refused. Her mother succumbs and dies, so does Bessy and suddenly Margaret's father. (Charles Dickens once said that much as he admires Elizabeth Gaskell he wished her characters were a little more steady on their feet!)

During this time, Thornton begins to doubt Margaret's virtue after he sees her walking out after dusk with a young man (who turns out to be her brother, but that's another story.) Margaret's stoicism and compassion see her through and after some clever plot twists she comes to appreciate the true value of the man she once disdained and the industrial town she once disliked.

Thank you so much to Make Do and Read, Shelf Love, A Few of My Favourite Books, Potter Jotter, Lilacs in May and Iris on Books for recommending this marvellous novel and I very much enjoyed this post about Victorian embroidery and art by Jane Brocket.
Posted by Vintage Reading at 10:11 21 comments: 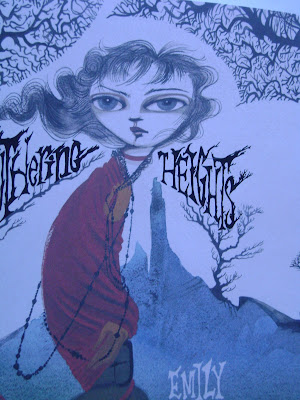 Wuthering Heights is the first Victorian novel I ever read and I'm always moved by its final poetic paragraph:

I lingered round them, under that benign sky; watched the moths fluttering among the heath and harebells; listened to the soft wind breathing through the grass and wondered how anyone could imagine unquiet slumbers, for the sleepers in that quiet earth.

The complex and sophisticated structure of the novel means that our first impressions of Cathy are pieced together by Lockwood when he spends the night in her old bed. The three versions of her name - Catherine Earnshaw, Catherine Linton and Catherine Heathcliff scratched into the ledge represent the identities that she will inhabit or may inhabit.
Her old text books with a diary scrawled as marginalia is the only time in the novel we hear Cathy's own voice, without it being represented through a narrator and even the nervous Lockwood is drawn to her when he sees the wickedly funny caricature of the curmudgeonly old servant Joseph that she has sketched on a blank page.
Each time I re-read Wuthering Heights it becomes more apparent to me that Catherine dominates the novel and is by far the most interesting character. As Lockwood observes ' the air swarmed with Catherines.'
Posted by Vintage Reading at 13:31 11 comments: