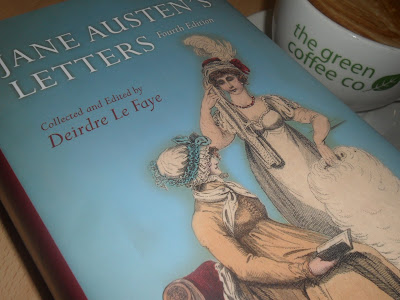 I will not say that your Mulberry trees are dead, but I am afraid they are not alive. Jane Austen, letter to Cassandra, 31st May 1811

Very much enjoyed the two Jane Austen documentaries screened in the UK over Christmas. Despite my reservations about the title, The Many Lovers of Miss Jane Austen proved to be rather good. Amanda Vickery is a charming presenter and thankfully did not wear a bonnet.

Jane Austen: The Unseen Portrait? was a riveting programme. The attempts of the art historians and costume experts to authenticate the portrait were fascinating and there was a good ole academic row at the end with Paula Byrne coming out of it rather well. My own feeling is that the portrait may well be genuine.
You are looking at my reading challenge for 2012. The new edition of Jane Austen's Letters edited by Deirdre Le Faye. You are also looking at my new year's resolution - to stop drinking so much coffee!
I would like to thank my fellow bloggers and readers for proving that the internet can be a place for friendship and creativity. Happy New Year!
Posted by Vintage Reading at 11:17 13 comments: 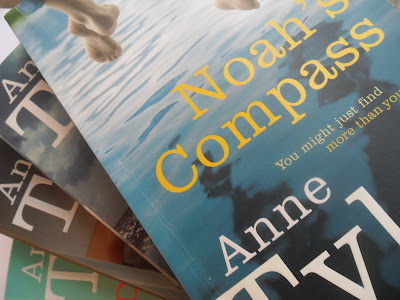 I've been buying books as Christmas presents using my usual 'one for you, two for me' method. Sticking to paperbacks though, hardbacks are just too expensive. All the Charlotte Bronte news yesterday made me want to re-read Jane Eyre when I've worked through my Anne Tyler phase. Very much enjoyed Digging to America. Look, I've even written a review!

Baltimore airport. Two Korean babies arrive in America to be met by their adoptive parents. A large welcoming party are gathered to greet Jin-Ho. Brad and Bitsy, her all-American adoptive parents and their friends and relatives hold balloons and pink ribbons and video record the arrival. Sooki has a much more low-key welcome from Sami and Ziba, the young couple who are adopting her and their mother, an Iranian immigrant, Maryam, who resents the way that Americans expect her to think and behave.

The two families decide to keep in touch so that the girls will grow up as friends. Each year on the anniversary of their arrival in America an Arrival Party is held to celebrate the event and the video is replayed. Brad and Bitsy raise Jin-Ho to retain her Korean identity - to the extent of occasionally dressing her in full Korean costume complete with headdress - and naturally Jin-Ho eventually rebels, wanting to be called Jo and coming to hate the Arrival parties.

I've always admired the way that Amy Tan writes about Asian-American culture clashes and Tyler writes with the same sensitivity and humour. I particularly enjoyed the chapter in which Hurricane Isabel hits the neighbourhood.

Jin-Ho began to feel prickly-skinned and excited, the way she did on Christmas Eve. During supper she kept twisting around in her chair to look out the kitchen window. The air was a weird shade of lavender and the trees were flipping their leaves wrong side to. "Keep your fingers crossed for our elms," her father told her. "As much money as I've spent on those things, I might as well be putting them through college." Digging to America, Anne Tyler