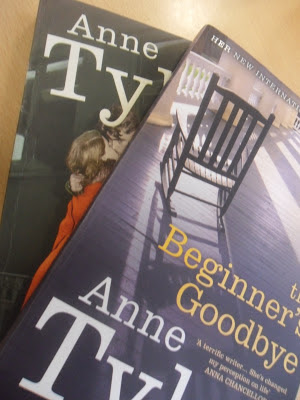 Anne Tyler's last novel The Beginner's Goodbye is now out in paperback.  I bought it in Sainsbury's for the princely sum of £3.49.  Rather nice to put a great contemporary novel into your basket alongside your milk, bread and yoghurts!

That's the thing about Anne Tyler.  She is a writer who is both complex and yet popular enough to be stocked in your local supermarket.  I've just read The Amateur Marriage which I think is one of her finest novels.  It's the story of Pauline and Michael, a couple who should never have married.  There is no domestic violence, adultery or debt - the kind of things that often tear couples apart - but their marriage is toxic nonetheless and the novel examines the relentless grind of being married to an unsuitable partner.

Michael is thrifty, cautious and calm.  Pauline is emotional, impulsive and sensitive.  Like Maggie in Breathing Lessons and Muriel in The Accidental Tourist she can be infuriating but I found her a far more likeable character than cold fish Michael.

The novel spans several decades beginning in Baltimore's Polish community where Michael grows up, becomes engaged to Pauline and enlists.  After being injured in the army they marry and raise a family.  Their marriage is put under further strain by the disappearance of their wayward daughter.  The implication is that she has joined the 1960's Haight-Ashbury 'summer of love' community and developed a serious drug problem.  This theme of the novel reminded me a little of Unless by Carole Shields.

Eventually Michael leaves Pauline and finds (rather too quickly I thought) the kind of cool, self-contained woman who suits his character.  The final chapter comes as a surprise and I'm still thinking about it, but there are hints that Michael still yearns for Pauline.  Vintage Tyler. 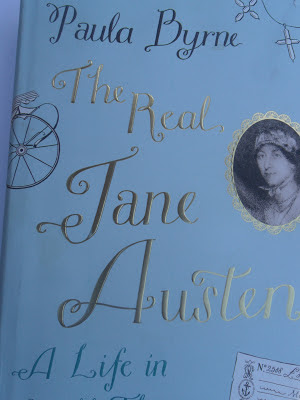 Whenever a new biography of Jane Austen comes along I'm on it like a car bonnet! Particularly if it illuminates aspects of the novels I'd not thought about before. Paula Byrne's The Real Jane Austen - A Life in Small Things has some very intriguing interpretations of Mansfield Park.

Byrne's theory that Tom Bertram, eldest son and heir, who is not romantically interested in women, or marriage and is fond of theatricals may be homosexual is not conclusive, but it is an interesting interpretation and of course, if he never has children Fanny and Edmund may inherit Mansfield Park.

The suggestion that Mrs Norris is a kleptomaniac because of her eagerness to whisk away the green baize curtain to her own cottage is backed up by the well-documented scandal in Austen's own family where her aunt, the wealthy Mrs Leigh-Perrot allegedly stole a card of lace from a millinery shop in Bath and faced jail, deportation or the gallows.

I knew the business with the locking and unlocking of gates at Sotherton was sexual imagery but I'd never before thought that Maria's stepping outside of the cultivated garden into the wilderness with Henry Crawford foreshadows her own 'ruin' when he seduces her.

This book has made me want to to re-read Mansfield Park and that is the best recommendation for any new biography of Jane Austen.

By the way, there is some very amusing and perceptive Austen criticism on the wonderful Bitch in a Bonnet blog.
Posted by Vintage Reading at 13:24 10 comments: