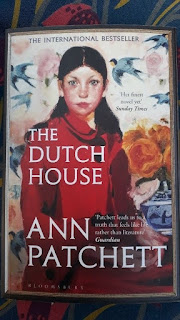 When my daughters were little I used to read them the Blue Kangaroo books by Emma Chichester Clark.  While they were entranced with the adventures of Lily who kept losing her toy kangaroo, I became besotted with the house Lily lived in. It was generously proportioned with high ceilings, fireplaces and tall bookshelves, wooden spindles on the staircase and panes of coloured glass in the front door.  We were living in a small semi at the time and when we eventually did buy a larger house I was looking for a Victorian house like the one in the Blue Kangaroo books.

I do like a novel that centres around a house or has a house as character.  Ann Patchett's The Dutch House features a post WW2 house built with secret crawl spaces, window seats and  cinematic size panes of glass.  There is a shattered ballroom on the third floor, once infested with racoons and now lovingly restored.  The house is a backdrop for secrets slowly revealed and a rock of a big sister, the magnificent Maeve. There is also a second wife whose coldness and insecurity centres around her insatiable desire for the house.

I think this is Ann Patchett's finest novel to date and I want to go back to the beginning and read it all over again!