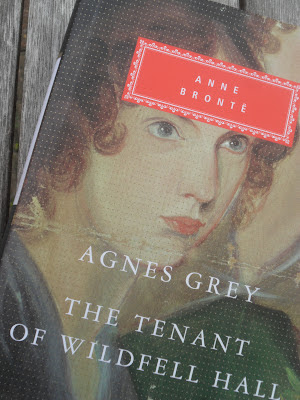 Nipped down to London last week to catch the last few days of the Writing Britain exhibition at the British Library which I first read about on Book Snob's blog (Thanks Rachel!)

I particularly wanted to see the Charlotte Bronte manuscript of Jane Eyre.  Her handwriting was exquisite and there was also a notebook with one of Emily's poems.  As usual poor old Anne didn't get a look in.  I don't understand why Anne Bronte is so often overlooked.  Agnes Grey is a little gem of a novel and Agnes has something of the wit of Austen and the spirit of Jane Eyre.

The British Library has a very nice little bookshop.  Did the fact that I already own two editions of Agnes Grey in paperback stop me buying it again in hardback?  Nah.  When I retire I probably won't be able to afford hardbacks so I want a small collection of Austen and Bronte in the Everyman's Library editions on my bookshelf.

This edition has an introduction by Lucy Hughes-Hallett who is a perceptive Bronte critic and the cover is part of the portrait of the Bronte sisters painted by Branwell which can be seen in the National Portrait Gallery.  Doesn't Anne have soulful eyes?
Posted by Vintage Reading at 13:39 21 comments:

'There was no possiblity of taking a walk that day'. 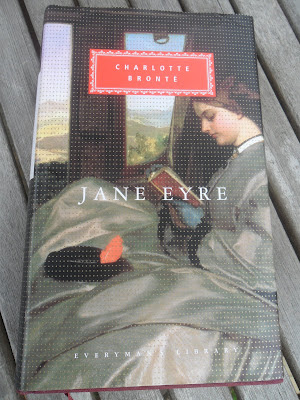 ... for as to elves, having sought them in vain among foxglove leaves and bells, under the mushrooms and beneath the ground ivy mantling old wall nooks, I had at length made up my mind to the sad fact that they were all gone out of England ...

There is a nip of autumn in the air and my thoughts are turning toward classic Victorian novels. I'm re-reading Jane Eyre. I'd forgotten how powerfully Charlotte Bronte uses the colour red in the early chapters to symbolise the oppression of Jane's unhappy childhood.

There is of course the terrifying 'red room' with its deep-red damask curtains, red carpet, mahogany-red furniture and 'soft fawn walls with a blush of pink' to contrast with the dazzling white bed where ten-year-old Jane is locked as a punishment. Bronte uses the stark red and white contrast in the opening pages where Jane hides behind a red curtain as she sits on the window seat looking out over the winter landscape and tracing frost flowers on the glass and then again when Eliza and Georgiana wear white dresses with scarlet sashes to the winter festivities which Jane is excluded from.

It was good to pick up a powerfully written novel after enduring 50 Shades of Grey for book group. It wasn't the sex that shocked me - just the bad writing!
Posted by Vintage Reading at 06:04 18 comments: