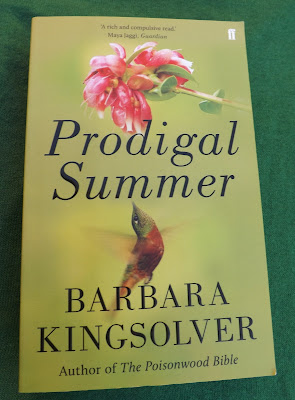 Whether she is portraying cereus the night-blooming cactus flower in The Bean Trees or the stupefying heat and exuberance of the African Congo in The Poisonwood Bible, Barbara Kingsolver writes fine literary fiction. I’ve just read Prodigal Summer and fallen in love with the Appalachian landscape of lunar moths and coyotes and wild honeysuckle. Adriana Trigiani’s lovable Big Stone Gap series was set in the Appalachian mountains of Virginia and I think The Hunger Games, too.


Like The Poisonwood Bible, the narrative switches between three characters in Prodigal Summer - newly-widowed Lusa, touchy forest ranger Deanna and Garnett an octogenarian engaged in permanent warfare with his neighbour. Kingsolver wears her extensive knowledge of the wildlife of the mountains and the hardships faced by the rural community lightly and builds a satisfying story with high comedy in a particular incident with a snapping turtle!


Deanna doesn’t like people very much and prefers to live in a remote forest cabin tracking the coyotes that are re-populating the area. She does rather like the handsome hunter she runs across and their passionate relationship is echoed by the overblown summer. My favourite character though is former entomologist, Lusa, who is left to put her academic knowledge to practical use on the rural farm she inherits after her husband’s death. It is hinted that her marriage was not entirely happy and Lusa has to face hostility from some of her husband’s sisters while occasionally fending off amorous attentions from some of her husband’s male relatives. The chapters featuring Lusa are called ‘Moth Love’ and her passion for moths is beautifully portrayed.

An Io moth rested on the screen, her second-favourite moth, whose surprising underwings were the same pinkish-gold as her hair.

It think I may have a prodigal summer of my own with a pile of Kingsolver novels and hopefully some warm weather to sit in the garden!
Posted by Vintage Reading at 12:28 9 comments: