My Life on the Road 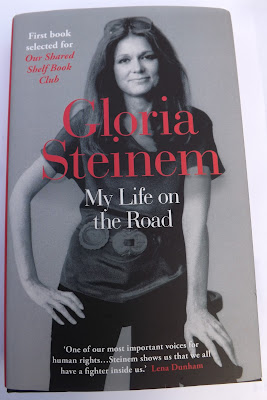 How do I love campuses? Let me count the ways. I love the coffee shops and reading rooms where one can sit and talk or browse forever. I love the buildings with no addresses that only the initiated can find, and the idiosyncratic clothes that would never make it in the outside world. Gloria Steinem 2016


Got my tickets for the Cambridge Literary Festival next week to hear Claire Harman talk about her new biography of Charlotte Bronte. I’ve been re-reading Jane Eyre and I never tire of Jane’s steely determination to lead a fulfilling life.


From one strong woman to another - born over two hundred years later - I listened to Gloria Steinem talking about her life and work on Radio 4‘s Desert Island Discs a couple of weeks ago and I knew I had to read her memoir My Life on the Road.


I found it quite inspirational. Steinem makes the point that you do not have to be an intellectual to be interested in promoting equality. It is by talking to taxi drivers, waitresses, lorry drivers and air stewardesses on her travels that she finds out what is going on in the real world from those who live in it and that change can be effected from the bottom up.
Her early life with a father who was kind-hearted but a bit of a chancer to say the least and a book-loving mother who suffered a nervous breakdown and required constant care is fascinating and reads almost like a novel. At one point in Las Vegas her father asks her to put his last fifty dollars in a slot machine because beginners are always lucky. She multiplies the money five times.

After college she travels for two years in India where she learns about talking circles which give everyone a chance to speak and be listened to. She then begins work as a freelance reporter but cites the 1977 National Women’s Conference in Houston as a life-changing event and she begins to develop her own skills as an organiser.

She writes of her love of campuses, her fear of public speaking, the controversy and opposition she has encountered for her pro-choice stance, the founding of Ms magazine and her friendships with such strong women as her charismatic speaking partner Florynce Kennedy and Wilma Mankiller the first female chief of the Cherokee nation.

Unbelievably Steinem is now in her eighth decade and continues to learn the lessons of the road - and the value of home.