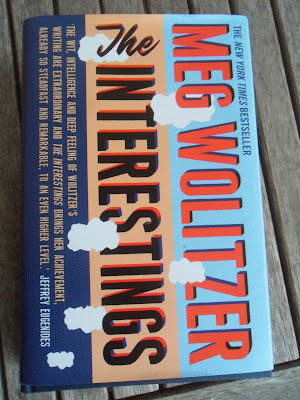 As soon as I saw the reviews for the new Meg Wolitzer novel I wanted to read it. I loved the idea of a summer camp called Spirit-in-the-Woods which is specifically for creative teenagers.

The Interestings begins in the 1970s with a group of teenagers who are would-be musicians, artists dancers and actors.  Six form a close friendship and call themselves The Interestings.  The novel chronicles their lives to the present day   I do like a 'how they turned out' story. Of course, life doesn't turn out fine for all of them.  Some do very well creatively and financially, some jog along and one spectacularly screws up his life.

I particularly liked all the cultural references which I could identify with being of a similar age to The Interestings - bands like the B52s and Talking Heads, Indian cotton shirts and Levis.  The lives of The Interestings are also influenced by notable events such as the rise and fall of Nixon, the Central Park jogger rape case, the Aids epidemic and, of course, 9/11.

Julie Jacobson is perhaps the most intriguing character.  A girl who is not exceptional but finds her niche among The Interestings as they hang out in teepees at Spirit-in-the Woods engaging in adolescent fumbling and drinking V&T (vodka and Tang).  Julie becomes Jools - popular, funny and accepted.

The Interestings is a big substantial novel.  The sort of book you can lose yourself in and I found myself reading late into the night unable to put it down.  That's not to say it's perfect, there are one or two clunky phrases and a couple of times a character uses an expression I'm pretty sure didn't come from the era they were supposed to be in at the time, but those are minor quibbles. I would highly recommend this book and I'm glad to have discovered Meg Wolitzer.

I've read some exceptionally good contemporary fiction this year.  As always, I prefer American women writers and I'm now reading The Burgess Boys by Elizabeth Strout.  There are new novels by Donna Tartt and Amy Tan to look forward to in the winter months and, of course, a new Bridget Jones novel by our own Helen Fielding.  Wonder how Bridget will cope with the Internet, blogging and Twitter?!
Posted by Vintage Reading at 13:15 14 comments: