What Matters in Jane Austen? 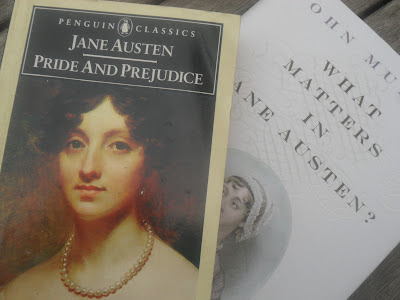 I've been getting a bit restless lately.  Keep looking at the MA in Eighteenth Century Studies on the Southampton University website even though it's too expensive, too far away, I work full-time and my daughters are about to enter sixth form.  I would like to study again though and the Unknown Jane Austen module sounds very tempting.  Daren't even mention it to my husband!

I very much enjoyed John Mullan's What Matters in Jane Austen - Twenty Crucial Puzzles Solved.  The 'crucial puzzles' are answered in chapters on the significance of blushing, which characters speak and which remain silent, who dies in the course of the novels and the significance of the weather to name but a few.

Mullan is excellent on Austen's technical genius, her pioneering of the 'free indirect style' of modern novels where the authorial voice takes on the characteristics of a character.  He also provides lots of interesting facts that Austen fans will relish.  For example, we learn that the importance of the weather in Emma prompted an earth scientist to make a meteorological study of it.  In a chapter on blundering we learn that Mary Crawford, the self-styled psychologist of Mansfield Park, blunders again and again and ultimately loses the man she loves.

In a perceptive chapter on death he notes that very few characters die in the course of the novels but they are all overshadowed by it.  I was particularly interested in the fact that Austen revealed to her family that the highly strung Jane Fairfax from Emma would enjoy 'nine or ten years marital felicity' with Frank Churchill before she died.  Fascinating to consider that Austen's plans for her characters extended beyond the end of the novels.
Posted by Vintage Reading at 12:42 10 comments: 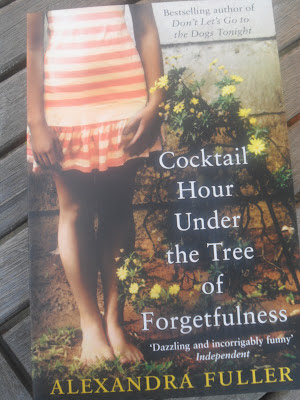 In Cocktail Hour Under the Tree of Forgetfulness Alexandra Fuller relays the story of her mother or 'Nicola Fuller of Central Africa' as she sometimes refers to herself.  Born on the Isle of Skye, Nicola Fuller moved to Kenya with her parents at the age of two.  Having lived in Africa pretty much all of her life she still considers herself 'one million per cent Scottish.'  She spends her Kenyan childhood show-jumping, attending convent school and playing with her pet chimpanzee.  She has unhappy stint at a secretarial college for young ladies in Kensington and then returns to the longed for equatorial light of Kenya.

Disembarking from the plane at Nairobi with newly blonde hair and wearing a blue linen suit she is spotted by the young Tim Fuller recently arrived in East Africa to work on a tree farm.  He falls in love with her and as a handsome couple 'there's none like us' they settle in Kenya and later manage a farm in Rhodesia. Alexandra Fuller intersperses the story of her parents with her own memories of a Rhodesian childhood, her mother driving her daughters to a fancy dress party in the land rover, checking her hair and lipstick in the rear-view mirror and positioning her gun out of the window.  Fuller writes beautifully of the 'sepia light' of Kenya and the wind 'red with dust' blowing from Uganda.

But this book is not just a story of Africa, it's the story of her mother who lived through the terrible violence of Rhodesia's struggle for independence and buried three babies on African soil.  Yet she retains a wonderful Nancy Mitford style humour.  When she sees predatory rich European women seeking sexual favours from young men she asks 'Why can't they just go to bed with a good book?'
This is no tale of the glamorous and foolish Happy Valley set.  Fuller's parents lived and worked on the land and still continue to run a fish and banana farm in the Zambezi valley today.

As a young woman Nicola Fuller hoped to inspire a classic African memoir such as West with the Night, The Flame Trees of Thikka or Out of Africa.  I'd say she has.