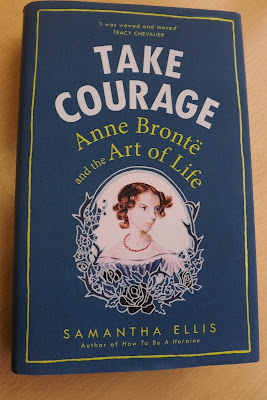 Agnes Grey is one of my favourite Bronte novels and I've never needed convincing that Anne Bronte had a creative genius equal to that of her two sisters, but it is good to read a passionate defence of Anne. Take Courage - Anne Bronte and the Art of Life by Samantha Ellis isn't a conventional or heavily academic biography. It has a traditional 'womb to tomb' structure but it also includes elements of the author's own life. Yet it's not exactly a bibliomemoir in the style of Rebecca Mead's My Life in Middlemarch either.

I loved the chapter about Tabby, the Bronte's devoted housekeeper who was something of a mother substitute to the young girls and regularly took them for walks on the moors, fostering their love of the natural landscape. It was Tabby who told them that when she was a girl there were fairies on the moors and the details about wild bilberries and bogs bursting and moorland flora and fauna are fascinating. Ellis is astute in her literary criticism and observes that Anne and Emily's early passion for 'botanising' surfaces in the heavily autobiographical Agnes Grey.

This book creates a portrait of a resourceful, independent young woman who wasn’t easily daunted and wrote two highly accomplished novels while still in her twenties. Of course, she didn’t reach her thirties and the account of Anne’s death at Scarborough is heart-breaking, particularly as Scarborough was where she set the final romantic scenes of Agnes Grey. Maybe she had written the happy ending she would have liked for herself. Ellis’s account of seeing Anne’s blood-stained linen handkerchief at the Parsonage sends a chill down the spine as you consider the realities of consumption.

This account of the life of Anne does not always reflect well on Charlotte and I'm not convinced that she actively suppressed her younger sister's writing career. That said, I enjoyed this book. There is an impressive bibliography and Ellis lists The Secret Garden by Frances Hodgson Burnett which she re-read while researching the Yorkshire landscape. I must re-read it, too!
Posted by Vintage Reading at 10:47 8 comments: