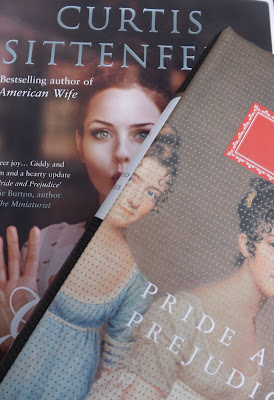 Even if her mother couldn’t recognise it, the shorts she had on were extremely stylish, as were her sleeveless white blouse and straw sandals. Curtis Sittenfeld


Despite my reservations about Austen prequels, sequels and re-imaginings I have to say I quite enjoyed Curtis Sittenfeld’s Eligible. Sittenfeld has re-worked Pride and Prejudice so that Mrs Bennet is a social climbing shopaholic, Jane a yoga teacher, Liz a journalist, Kitty and Lydia are glamourous vain, crude and addicted to CrossFit and pseudo-intellectual Mary is as unappealing as in the original.


If you know Pride and Prejudice it’s fun to spot the similarities and differences. The novel begins with Chip(!) Bingley, a graduate of Harvard Medical School, arriving in the neighbourhood having reluctantly appeared on a reality show called Eligible to find the perfect partner. Mrs Bennet, of course, is keen for him to meet her daughters as ‘she wouldn’t mind a doctor in the family.’ At a barbecue, Liz meets the aloof Fitzwilliam Darcy a neurosurgeon and overhears him saying that he is ‘not surprised’ she is single as in this town as ‘they grade their women on a curve.’ Rather than laugh as his ungallant behaviour as Lizzy does in the original novel our heroine immediately challenges him.


I think the problem with the novel is that there is no spark between Liz and Darcy. Even after they begin a sexual relationship while superficially hating each other there is not the wit and humour of the original novel. What does work well is the Wickham character, the affection between Jane and Liz and the awfulness of the two younger sisters.


OK it’s not Jane Austen, but it kept me turning the pages. Have you read it?
Posted by Vintage Reading at 14:16 9 comments: