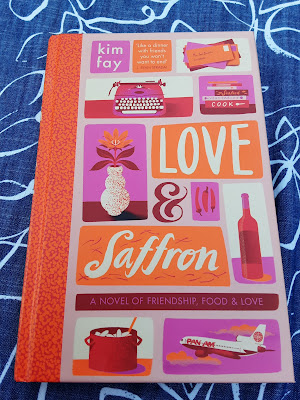 Mother loves her magazine subscriptions, and every month, as soon as they arrive, she folds back the pages to her favourite columns. The first two she reads are yours and Gladys Taber's "Butternut Wisdom" in Family Circle. I prefer yours.  It makes me feel like I am having a conversation with a good friend, and your enthusiasm for life has taught to be more aware of my own world around me, and especially the outdoors. Oct 1st 1962.

Kim Fay's warm-hearted Love and Saffron is a novel of female friendship relayed in a series of letters exchanged in the early 1960's.  It  has echoes of Helene Hanff's 84, Charing Cross Road.
Imogen Fortier writes a column called Letter from the Island in the Northwest Home & Life magazine detailing weekends spent in her cabin on Camano island, Washington.  Her accounts of island living - picking wild native blackberries, clam digging, watching cormorants and sandpipers - prompt a fan letter from Joan Bersgstrom, a 27 year old Stanford graduate who lives with her mother in California.  Joan encloses a gift of saffron and a recipe for using it in a dish of steamed mussels.
A correspondence develops between the older and younger woman who share recipes, book recommendations and increasingly their hopes and fears.  This is set against a background of events of the 1960s.  Both women are devastated when Kennedy is assassinated.  Joan is not keen on the new fashion for stirrup pants and a little uptight about Helen Gurley Brown's newly published Sex and the Single Girl.  Imogen, being almost 60, is much more laid back but she can't quite get used to the four boys from Liverpool with funny haircuts although does learn the words to Twist and Shout.
The friendship culminates with Imogen paying a surprise visit to Joan in California.  Then the correspondence goes quiet and you will have to read it to find out why!
I loved all the sixties references and concerns - Joan Didion, Jane Jacobs, Jax fashions, the Cuban missile crisis - and Kim Fay's skill as a writer makes you feel that you are reading actual letters rather than fictional representations.  This book would make a lovely Christmas gift for female friends.
Posted by Vintage Reading at 12:23

I loved this book and have purchased a copy to give to my mother for Christmas! I'm sure she'll appreciate it, too.

This book sounds terrific. I'm adding it to my TBR list. So glad you posted about it. I also loved the bright cover of it :)

I enjoyed this one too!

I also really enjoyed this book--it was fun to remember why reading your blog post.

I have never heard of this book so thanks for reviewing it. It sounds charming - just my kind of thing.

JoAnn, I hope your mother liked it!

Audrey,books with recipes or a food focus aren't usually my thing but I did like this.

Jane, I will look for more from this writer.