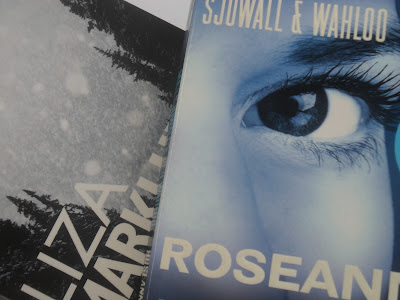 Having been glued to the Danish detective series The Killing with its morose heroine detective Sarah Lund I've been wanting to dip my toe into the genre of Scandi-crime novels.

Radio 4 recently adapted the classic Swedish crime novel Roseanna by Maj Sjowall and Per Wahloo who famously wrote the Martin Beck series after putting their children to bed.  Roseanna was so riveting on the radio I knew I had to read the book.

The body of a young woman is spotted in the scoop of a dredger clearing a Swedish lake.  Detective Martin Beck is bought in to investigate and he begins the painstaking process of identification which takes several weeks as no missing person has been reported.  After discovering her identity he then attempts to unravel the events which resulted in her death.

Before internet, mobile phones and sophisticated forensics the process is time-consuming with long periods of inactivity and boredom.  Beck, however is tenacious and assisted by his able colleagues he finally makes a breakthrough.

Published in the 1960's this classic police procedure novel has barely dated.  Although you may wince at a couple of the expressions used to describe women it is not gory or excessively violent.  I now want to read more in the Martin Beck series and I'm also going to try Liza Marklund.

Any Scandi-crime recommendations would be very welcome.  Season's Greetings to all bloggers and readers!
Posted by Vintage Reading at 11:07

This sounds like it might be a nicer introduction to Scandinavian crime fiction (yes, I am very far behind in discovering it) than some of the other books I've read about!

Happy holidays and happy new year to you, too, Nicola!

Lord - we daren't start watching the latest Killing series, cos we know we will just sit up all night til we're done! Compulsive! Happy Christmas Nicola.

The only Scandinavian crime author I've tried is Icelandic author, Yrsa Sigurdardottir. I thought the book, Last Rituals, was really rather good, but have not read any more. If I was going to recommend one crime book from those I've read this year it would be The Black House by Peter May, set on the Isle of Lewis. It was stunningly good.

I read 'Roseanna' earlier this year and have been meaning to go back and read the others in the series ever since. Thanks for the reminder. My own favourite Scandinavian authors are Anne Holt and Helene Tursten. I can't recommend either of them too highly.

Nicola, I was glued to the television when "The Killing" aired recently. Thank you for the tip about this Scandinavian detective series. I adore mysteries and would love to read this. Happy Holidays!

I stalled after the second book in this series and I really must get back to it. Most of my crime fiction has been watched rather than read recently, but the authour I'd recommend is johan Theorin.

The Scandanavians have really taken over the crime fiction world, haven't they? I've only read Wallander, but I've enjoyed the books I've tried.

Merry, merry, Nicola. I don't know this author or series, but, will add to my list.

Merry Christmas to you and your family, Nicola!

I love a good detective story! Why haven't I heard of it before? Well, I have now and will be looking for it at the library. Many thanks. Hope your Christmas was a happy one.

I read Roseanna at the beginning of the year, and really enjoyed it. I had read #4 last year, The Laughing Policeman, as it was the only one my library had and I wanted to see if I liked the series. It was on my top 10 for last year, and now I'm making my way through the series proper. I like the character of Martin Beck, and how dogged he is, how persistent, don't you?

Other good series: Jo Nesbo's Harry Hole series are among my favourites, Liza Marklund, Anne Holt are two I've heard about, Hakan Nesser is one I'm about to try, and the Kurt Wallender series is very good. Also all the ones your other commentators mentioned are good - I especially like Yrsa Sigurdardottir and Arnaldur Indridason for Iceland.

I haven't read much Scandinavian crime fiction, but I did read The Laughing Policeman, part of the Martin Beck series, and I liked it very much. I'll make sure to get to Roseanna at some point.

I so understand the desire to dip one's toe into Scandinavian crime. My favorites are Mercy by Jussi Adler Olsen, and I also liked The Devil's Star by Jo Nesbo. I think my favorite is The Boy in the Suitcase by Agnes Friite (sp?!)

The titles you mention in this post are new to me.

I've enjoyed Jo Nesbo, too, and hope to get back to him next year. I really want to read Roseanna eventually, too. Happy New Year Nicola. Hope 2013 is filled with good reading!

I found the first four Martin Beck books in a charity shop a year or so ago but they have sat on the shelf since then. As this is my year for reading from home,I will hopefully get around to reading them sooner rather than later!

I will add my vote to Fleur's for Johan Theorin - I have read all three of his books that have been translated and loved each one but I do like Jo Nesbo too and am currently enjoying a crime novel set in Iceland - although since it is written by a British author who lives there (Quentin Bates) I'm not sure if it necessarily counts as Scandi crime!

Alex, I think you will enjoy the rest in the Martin Beck series - I'm on number 5! I keep looking at the latest Anne Holt, think I'll try it. Happy New Year!

Sunday, Happy New Year, yes The Killing is fantastic. Shame they've made only three series, but I suppose it's better to finish at the top of your game.

Fleur, thanks for the recommendation and Happy New Year!

Anbolyn, yes I wasn't to keen on the dragon tattoo stuff because I thought it was too violent, but I love the Martin Beck series. Happy New Year!

Susan, thank you so much for your recommendations. I've now read 5 in the Martin Beck series. Loved The Laughing Policeman. I think the character of Martin Beck is brilliantly drawn. He's often under the weather, unhappily married, bogged down with work but he always gets the criminal! Happy New Year by the way!

Rebecca, oh I loved The Laughing Policeman and Roseanna is just as good. Happy New Year!

Bellezza, ooh those names are new to me, thank you. I have a real thing about Scandi crime at the moment! Happy New Year!

Liz, thank you for those names they are new to me. Martin Beck is certainly worth reading, especially Roseanna and The Laughing Policeman. I think they are intended to be read in order but I've switched it a bit. Happy New Year!