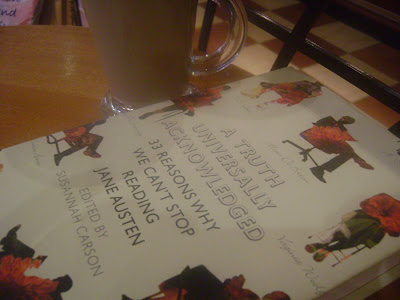 I couldn't get a clear picture of this book in Costa and spent a few minutes thinking that I really should get a decent camera instead of the cheap and cheerful one which I have used for a few years now. Then I had a reality check and remembered that this is a reading blog and not a lifestyle blog and it's easy when you're blogging to get carried away with the whole presentation thing, don't you think?
This collection of essays edited by Susannah Carson about the pleasures of reading Jane Austen has absorbed me all week. In her charming essay The Radiance of Jane Austen Eudora Welty describes Austen as being blessed with 'fairy gifts' namely a genius for comedy and originality. In the wickedly titled Terrible Jane Amy Bloom revels in Austen's satire and laments that in her time her work was appreciated for all the wrong reasons by writers who 'were not fit to clean her muddy boots' and that she was forced to 'take seriously' the literary efforts of her nephews and nieces attempting to emulate their Aunt Jane.

I particularly liked Susanna Clark's argument that Austen wasn't a 'visual writer'. The bonnets, dresses, ballrooms and carriages belong to the world of film and television. Austen herself barely described these things, being more interested in the psyche of the character.
Alain de Botton describes Austen's novels as 'books that speak to us of our own lives with a clarity we cannot match' and E M Forster brilliantly argues that though Austen invoked greatness in her novels 'she cannot retain it any more than we can.' After completing Pride and Prejudice Austen visits the portrait galleries in London and searches for a painting of Elizabeth.

'I dare say she will be in yellow, she writes to Cassandra. But not in that nor in any colour could she find her.'

I really must read Deirdre LeFaye's collection of Austen's letters which has been languishing unread on my book shelf for well over a year now.
Posted by Vintage Reading at 10:14

This sounds wonderfully fun! I had the good fortune of seeing an exhibition in New York that featured many of Jane's letters which were just as witty and lively as her novels - it prompted me to pick up a collection of her letters, because I imagine they'll offer great comfort when I've finally read all of her books (something I am loathe to do). This sounds like something else to help ease that pain as well!

This sounds like the kind of book I like! I have quite a few books on JA, biography and criticism, so don't suppose I can justify getting yet one more... But... My latest purchase is her letters, which I'm looking forward to putting on my 'reading' pile!

This sounds marvellous! I love reading other people's opinions of Jane Austen and basking in the shared joy of her novels. I shall definitely be buying this when I return from New York!

All real writers have their own terribleness!

Hope you won't be disappointed in the letters. I think Cassandra burned the really good ones.

This sounds wonderful. I really need to track down a copy of this book.

Lovely! I must remember to put this on my Amazon wishlist...

And I think you'd like 'More Talk of Jane Austen', which I read a while ago...

Reading Eudora Welty on Jane Austen sounds like my idea of heaven. (I'm ashamed to say that I bought this book when it came out but I haven't read it - often a consequence of buying a book instead of borrowing it from the library. Now I especially want to!)

I'll look a copy of this book!

Steph, I would love to have seen that exhibition. I know some readers over the years have reported that her letters do not sparkle like the novels but I don't suppose they were ever intended for public consumption.

Penny, I was going to wait for the paperback but I couldn't resist. I now have a complete shelf dedicated to Austen. I'm going to read the letters, too.

Rachel, shame you missed the Austen exhibtion of letters that Steph mentioned. I think there will be plenty of Austen addicts in NY though! You will enjoy this book.

Shelly, yes I'd love to know what Cassandra burned - and didn't her niece destroy a few, too. This book has an interesting piece on her letters - while some authors wrote letters with the knowledge they would someday be published because of their fame in their own lifetime, Austen clearly didn't.

makedoandread, I liked this even more than Jane's Fame, I have to say.

Audrey, Welty writes beautifully about Austen. Do let me know what you think when you read it.

Frisbee, I know you will love this!

LINDA from EACH LITTLE WORLD said...

I had not heard of this books so really appreciate your mention.