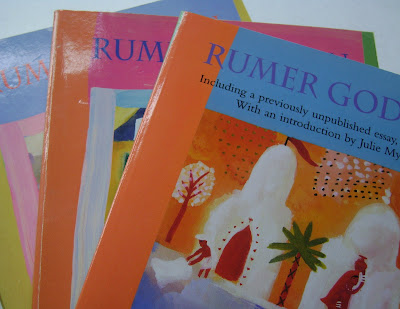 Nan used sometimes to play charms with them. She dropped pieces of lead tinfoil into a saucepan of boiling water, and, when they were softened, she lifted them out with a spoon on to a cold plate where they hardened. Whatever shapes they made told your future.

Four children, Bea, Harriet, Bogey and Victoria are growing up in colonial India. They live in a beautiful house with an exotic garden containing jacaranda trees, poinsettias, bamboos, bridal creepers, passionflowers and Harriet's special cork tree. Sitting on the veranda their Nan makes charms to tell their future. Bea's takes the shape of a ring, Harriet's a globe, Victoria's a bucket and Bogey's refuses to coagulate and take shape .

Like The Greengage Summer and The Peacock Spring, The River is one of those perfect coming-of-age novels which Godden excelled at. Told from the point of view of Harriet, a literary child on the verge of womanhood who keeps journals and writes stories, we learn of her jealousy of her beautiful older sister, Bea, who no longer wants to be her playmate and her affection for her rough and tumble brother, Bogey, whose penchant for searching for cobras in the garden ends in tragedy.
As Julie Myerson writes in her charming introduction to The River:

Plenty of great novels boom large and loud, but just occasionally along comes one so tiny and sneakily perfect that it stops you in your tracks.

I've never been lucky enough to come across a Rumer Godden novel in a second-hand bookshop so I'm collecting these bright and summery re-issues by Pan Books to read over the coming weeks.
Posted by Vintage Reading at 03:28

I love Rumer Godden, and very occasionaly find her books second hand. I've just come across 'In this house of Brede' and am looking forward to it. I can't for the life of me understand why she's falling out of print again.

Oh my God, I love Rumer Godden! She is one of my favorite writers. I'm so glad you're writing about her.

My favorite is Kingfisher Catch Fire, but I'm due for a reread of The River.

I find her books quite often in second-hand shops and used bookstores. Keep looking!

I haven't read The River but will now. Thanks for telling us about it.

I have never read Rumer Godden. I know I've heard her name somewhere but really have no idea what her books are about. From what you wrote, I want to give her a try. Will keep an eye out for her (I don't think I've ever seen her books in bookstores here yet).

The few Rumer Godden books I have are all old hardbacks. I particularly like her books about houses, e.g. China Court and A Fugue in Time. Good to see she's being reprinted and made available again.

Thanks for letting us know about these reprints. I will buy one or two. On my blog in December 08 I reviewed Rumer Godden's interesting autobiography (part 1)A Time to Dance, No Time to Weep.
I tried to include a link but Blogger didn't seem to like it!

Here is the link in case it works this time.

Rumer Godden wrote my favorite children's book of all time: The Kitchen Madonna. Such a lovely quirky story. And her doll books are wonderful as well: Miss Happiness & Miss Flower & the sequel Little Plum.

Like Susie Vereker I love Rumer Godden's autobiography: 'A Time To Dance, No Time To Weep' and 'A House With Four Rooms'. Just absolutly brilliant.

I'd forgotten about Rumer Godden when my daughter asked for some recommendations of books about young adults. I'll suggest these to her. Thanks!
I've enjoyed finding your blog and am about to add it to my blogroll. :o)

The Greengage Summer is one of my all time favourite books and one that I have passed on to both my daughters.
You are not alone in finding her books difficult to find although our county library has a reasonable stock so I am working through that.

Sara at Come Away With Me said...

The River is amazing....I haven't read it in about 15 years but I still remember it. There is a black and white movie of it too...did you know?

Desperate Reader, I've not read the title you mention, please let me know what you think. Unbelievably I'm having problems getting a copy of Black Narcissus.

frisbee, that's another title I want to read. I thought I'd spend the summer with a pile of Rumer Godden novels in the garden - my staycation!

Debbie, I found the second volume of her autobiography in a used book store, but not the first! Never any of her fiction, though.

Claire, I'd recommend The Greengage Summer as your first Godden. As much of a classic coming-of-age story as I Capture the Castle. Hope you enjoy it!

callmemadam, she's good on hotels, too. The descriptions of the hotel setting in The Greengage Summer are fabulous. I'd like to read China Court.

Susie, hi, thanks for pointing me to your review. I've printed it off so that I can give it some time and attention on my day off work this week. I have the second vol of her biog which I did find in a used book store, not much good without the first, though!

Alexandra, you've mentioned two more titles I've not read! I'd like to read Little Plum - I hope Nona and naughty Belinda feature in it.

Penny, I have the second vol - wondering if it will make sense without the first? I'd like to know more about her relationship with her sister, Jon.

Penny, thanks for dropping by! She's such a good writer that her work doesn't seem dated and she doesn't shy away from discussing the physical changes and emotional confusion that occur between adolescence and womanhood.

LizF, I adore The Greengage Summer. Especially Eliot who must surely be based on Jay Gatsby. Madame Zizi's jealousy of Joss is depicted so well.

Sara, I didn't know Jon had published novels. I think I did read there was a film of The River, in fact quite a few of her novels have been filmed but you rarely see them on British TV. Apart from Black Narcissus which I believe Godden hated!

In This House of Brede is the only Godden novel I have read and that was quite sometime ago. Actually read it because it looked so charming in the used book store I could not resist. Maybe I should go back to looking for more. This feature is a lovely idea!

I love Rumer Godden's novels! And those are beautiful editions. I haven't read The River yet, though, so I'm going to see if I can locate a copy.

LINDA from EACH LITTLE WORLD said...

Those are wonderful new editions of Godden. I've read about half her books and all of them from the library, except for China Court which I found secondhand. I've read it a million times and it is one of the books that really got me interested in gardening. I went looking for it because it was serialized in a magazine my mother had in the 1960s; very Dickensian!

Frances, hi, I'm awaiting my copy of In This House of Brede. I think I've only really scratched the surface of Godden's complete body of work.

makedoandread, The River is charming and sad. Coromandel Sea Change is a real page-turner, too. Both with Indian settings.

Linda, I'm unfamiliar with China Court do review it. By the way, I haven't been able to post comments on your blog or Random Jottings lately. Not sure if it's my settings or yours!