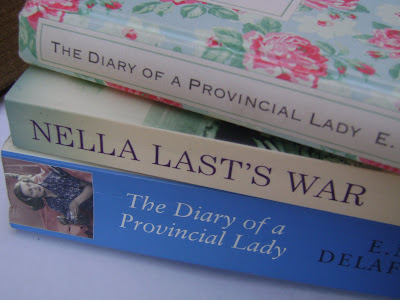 Thank you for your comments on Nella Last's Peace and for being kind enough not to point out that I'd got the apostrophe in the wrong place! Let's hope the much anticipated third volume has a less cliched cover. Caustic Cover Critic has a very good post on the way the 'Gorbals boys' images are edited for many social history book covers. I'm now reading Nella Last's War and Mary's comment about whether she was a truly likeable women has intrigued me. Certainly she had a kind heart, but does the fact that this is a diary necessarily mean that everything is true? Nella states that she wishes she was closer to her daughter-in-law but feels her daughter-in-law is jealous of her close relationship with her son. I couldn't help wondering whether Nella was a teensy bit jealous of her daughter-in-law!

What is in no doubt is her gift for writing. Nella reminded me a little of Jane Austen who remained unpublished for much of her life but never doubted her literary genius. To a certain extent, Nella did have an admiring audience for her writing. She was known for writing brilliant letters and when poor Jess had a complete nervous breakdown - what we would probably now call severe post-natal depression - she kept the doctor and matron in the hospital entertained with Nella's letters.
Nella writes with empathy of the unbearable strain that women were under with poverty, blackouts, food shortages and men going off to fight:

One woman I know - a big-made woman of about fifty-six who took on an air-raid warden job - has had a nervous breakdown. Her niece said she had always had a fear of the dark and, now she knew she would have to take her turn in the dark all winter, she has cracked up.

I want to read more about the blackouts so I've looked out The Provincial Lady in Wartime and I'm pretty sure there are some descriptions of the blackouts in Mary Wesley's The Camomile Lawn. Maybe somebody can remember?
Posted by Vintage Reading at 10:04

These diaries sound wonderful. I loved the Provincial Lady in Wartime but its tongue in cheek view of everything does give the war too much of a rose tinted edge in my mind. I'd love to read a more immediate and real account and this looks like it!

It IS interesting to consider whether Nella as a likable or unlikable person. She is very intense when the war starts--too patriotic, perhaps, too hard on her son, Cliff. But then she begins to understand what it means and is less jingoistic. By Nella Last's Peace i liked her very much.

I hope another book will be published!

I'm sure I remember blackout scenes in 'The Camomile Lawn'--with people getting up to sexual shenanigans during them. A crime novel that makes good use of the blackouts is Laura Wilson's 'The Lover'.

Three other good Blitz-era diaries: 'Few Eggs and No Oranges' by Vere Hodgson (Persephone reprints this), Joan Wyndham's 'Love Lessons' (Virago), about being a hormone-addled teenager during the war, and Simon Garfield's 'Private Battles', a collection of four WW2 home front diaries from the Mass Observation archives.

These sounds so fascinating and the topic very interesting. I have never heard of these titles before. It all sounds very depressing though, as terrible as that sounds.

Can I add to the recommendations? Mrs Milburn's diaries are very good too, and I'd also endorse the Joan Wyndham and the Private battles collections.

I would certainly endorse Vere Hodgson and 'Private Battles' as being fascinating reading as well as humbling when compared with the sort of things that we complain about now!

I've already got some, but I'm shamelessly stealing all these recommendations!

I'm trying to remember if there are any blackout scenes in any of Elizabeth Jane Howard's Cazalet series. I need to take a look at those.

booksnob, I agree the the PL is very flippant compared to Nella Last. Possibly a coping mechanism? Let me know what you think of Nella Last's diaries.

frisbee, I read them in the wrong order so I'm piecing her personality together backwards! Can't wait for vol 3.

JRSM, yes TCL is very bawdy to say the least! I'll look out for the Laura Wilson and the Vere Hodgson has been on my wishlist for a while.

Mae, Yes, they're dark at times but the day to day detail is amusing and interesting.

Verity and LizF thank you for the recommendations - I'd much rather receive them from book bloggers than newspaper reviews and publishers. I'm adding them to my list.

makedoandread, I still haven't got around the the Cazalet's yet. I'm going to get the first volume for my holiday!