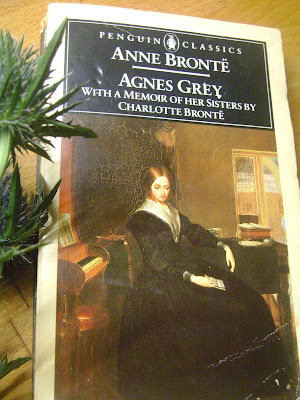 Anne Bronte drew on her own experiences as a governess in her portrayal of Agnes Grey who battles with spoilt brats, pushy mothers and fashion-obsessed young ladies. There are no plot twists and turns in this novel, but a straightforward narrative which begins with Agnes Grey's strong desire for independence. Like Jane Eyre, she places an advertisement for work in a newspaper which leads to a position attempting to teach three unbelievably spoilt children (one of them spits in her workbag!) while facing constant criticism from their doting mama. When she is unceremoniously sacked, Agnes goes on to a position as governess to three older children and faces a different problem, namely that sixteen-year old Rosalie chases any man who crosses her path including one that Agnes rather likes herself ...

Anne Bronte created a little gem of a novel in Agnes Grey and the final chapter where Mr Weston comes looking for Agnes on Scarborough beach is as romantic as anything written by her sisters.
Posted by Vintage Reading at 10:52

Agnes Grey is one of my alltime favourite books. I adored the character.

I've always avoided this one. Not sure why really. Your review makes it sound interesting though, so maybe.....

I love this (and its ending) as well, must re-read it soon.

I love love love that beach scene. Coincidentally, I just read this and reviewed on my blog (and mentioned your review as well).

Agnes Grey is one of my favorite Brontes. As much as I love Jane Eyre, I thought Anne did a much finer job of showing the realities of nursery life!

I've never read this one so I must add it to my list of books I would like to read next year. Thanks for reminding me of it.

Hi all, good to know Anne Bronte has many admirers. I'd like to read some biographical work about her. I believe she was particularly close to Emily. If anyone can recommend a good biography of Anne, please let me know.

Oh, I'd love to read this. I read the Tenant of Wildfell Hall for the first time a few months ago and was really surprised by Anne's writing which was brilliant. I can't believe she is overshadowed by her sisters. Of course, I prefer Jane Eyre but Tenant was a better read than Wuthering Heights.

It's not a biography as such but 'A Taste of Sorrow' by Jude Morgan gave me a real insight into the Bronte sisters and re-ignited my desire to re-read their novels.
Of course I knew the basic facts but somehow the book brought them alive with all their character quirks.

Oh, oh, I love your blog, and I'm half afraid to post because I *just* reviewed Agnes Grey and I hated it!

Loved your review, though; it's helped me to see that maybe I was a little harsh.