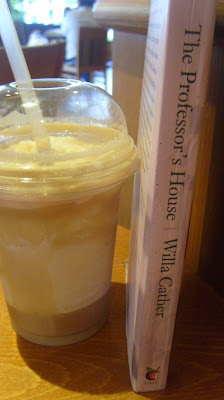 At times the wire lady was most convincing in her pose as a woman of light behaviour, but she never fooled St Peter. He had his blind spots, but he had never been taken in by one of her kind!

Remember Miss Blossom, the dressmaker's dummy in I Capture The Castle who offers womanly advice such as 'Well dearie, that's what men are like' to the unworldly Rose and Cassandra? Interestingly, there is also a well-developed female form in a wire skirt in the professor's study which doubles as a family sewing room in The Professor's House. This form, too, acts as a kind of substitute for real relationships. Dismayed, as his wife and daughters are drawn into a life of consumerism and acquisition, the professor increasingly prefers the company of the dressmaker's dummy.
My Antonia is generally considered to be Willa Cather's finest novel but I think for sheer enjoyment The Professor's House, originally published in 1925, is my favourite. Take a look here and here for a beautifully written account of a visit to Willa Cather's home town, Red Cloud, in Nebraska.
Posted by Vintage Reading at 16:04

I loved this book too. For some reason recently I've been thinking a lot of the middle part of this book: Tom Outland's adventures in the desert. That part could be a whole book unto itself--I really loved her descriptions of the desert and Tom's life out there. Too bad it's still in copyright so we can't publish it on Girlebooks.

I love your comparison of Miss Blossom to the professor's dummy! I had forgotten all about that.

The Professor's House is one of my favorites, too.

I couldn't agree more. Not only is TPH my favorite Cather book, it makes it into my top 100 faves of all time.

Laura, the first time I read it I thought there was a disparity between the two halves of the book until I realised that the professor's story is about his discomfort with new money and conspicuous consumption and contrasts with Tom's story on the Blue Mesa about a peace-loving ancient society who value art, craft and design and pre-date capitalism. Cather is so clever in her inter-weaving of the two stories.

Thomas, one of the greatest pleasures of having a book blog is to 'meet' readers who love the same writers that I do. I'm very fond of the ole prof, a brilliantly drawn flawed character with a kind heart.

What a beautiful, beautiful book. I just loved it and, having only finished it this afternoon, my head is still spinning. What an amazing writer and how memorably she depicts characters and landscapes. Heartfelt thanks for the recommendation as I have discovered a new favourite.

Delighted that you loved it. I find it difficult to pinpoint what makes Cather's writing style so appealing but with each of her novels that I read I admire her more and more.