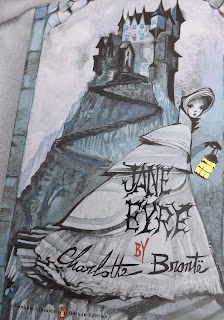 Posted by Vintage Reading at 12:42

You do make me want to reread Jane Eyre! How I love Jane, the nearly perfect heroine. But I had completely forgotten about the typhus outbreak. It's odd, the details we retain and those we don't.

Yes, each time I read I like Jane more (and Mr Rochester less!) I'm thinking of revisiting the Elizabeth Gaskell biography of Charlotte next.